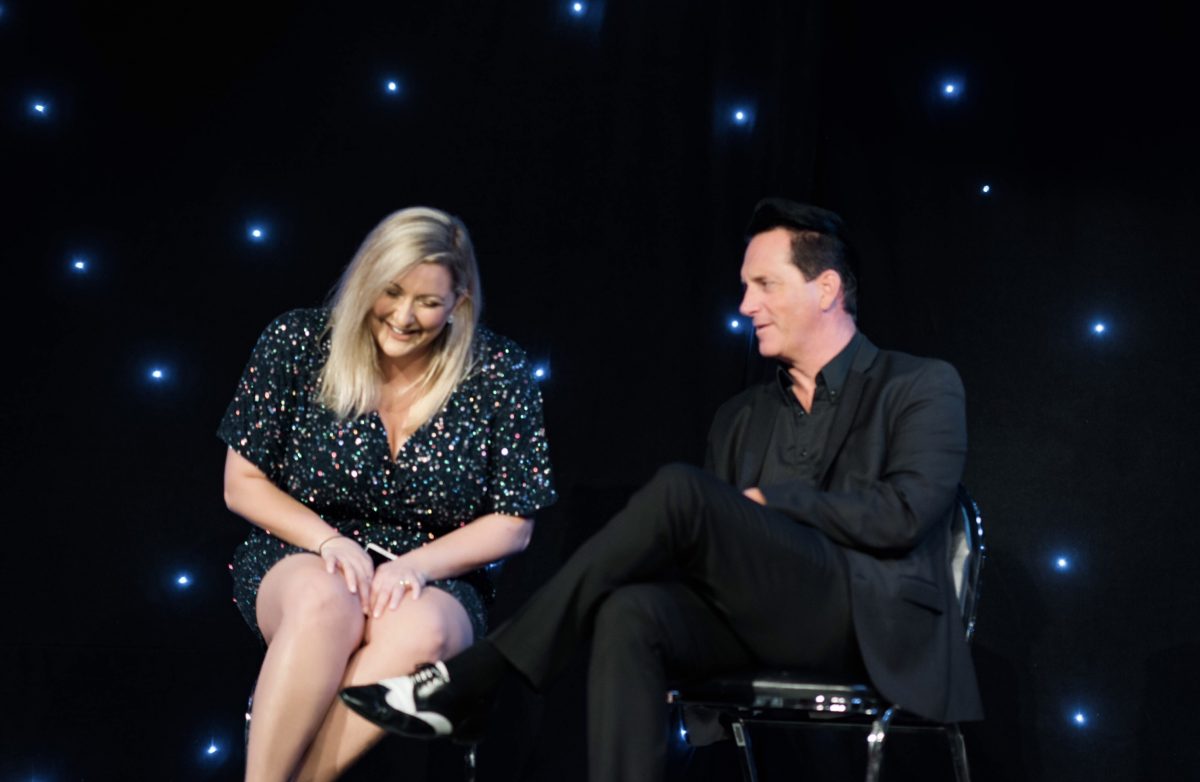 Our interview with the famous Vegas headliner and uncensored hypnotist Anthony Cools! 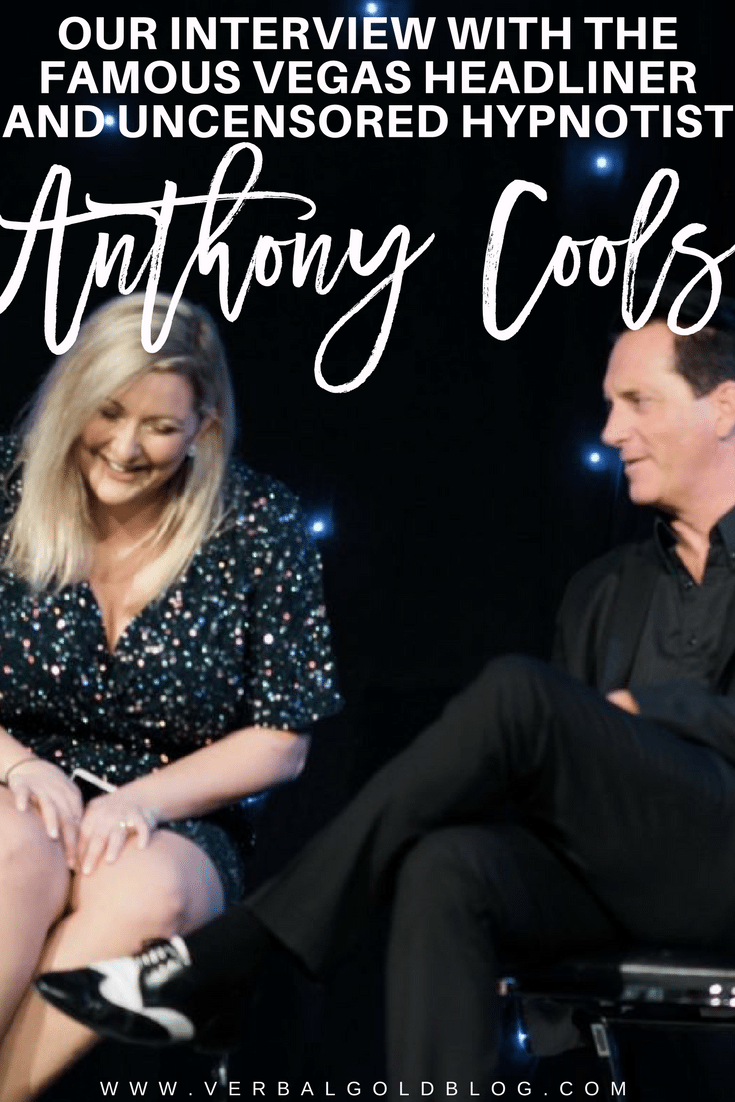 Even after 22 years in the business and 11 years performing at The Paris Las Vegas, Anthony Cools is mesmerizing. He has this indescribable presence on stage that is captivating. Maybe because he’s the best hypnotist in the business, maybe it’s because he’s really good at his job, or maybe it’s his playful sense of humor and uninhibited personality that draws you in.  No matter what it is, you know once Anthony screams “sociable” with his glass raised in the air, you’re in for the night of your life! You won’t want to leave your seat because you’ll be too busy crying from laughter throughout the entire show!  The energy exuding from Anthony, his charismatic charm, and vibe from the theater is contagious.  His show leaves you wanting more and you’ll be telling all your friends about the “experience”.

So we sat down with the famous Vegas headliner to get to know the man behind The Anthony Cools Experience.

The Anthony Cools Experience has been awarded the Best in Vegas multiple years in a row and he was just honored by MyVegas as one of the Top 100 Men of The Year for the second year in a row! My favorite question to ask successful entrepreneurs, especially smart ones with multiple profitable businesses, is for advice.  I asked Anthony for 3 pieces of advice he’d give to entrepreneurs.

Those are all great pieces of advice.  Want to know what else this uncensored comedic headliner has to say? Check out our video interview below! Be careful because shit gets real and there are some hilarious sneak peeks of his one of a kind hypnosis show, aka the longest running hypnosis show on the planet, aka the most fun you will ever have at a show in Vegas!

VGB: How would you describe your show?

What do you do if people don’t volunteer?

If I’m drunk generally I’ll see two or three times more people up here than are actually up here. And therefore I have a fantastic show whether the audience agrees with me or not. I don’t know. It’s a dirty hypnosis show.  You see hypnotist at the fairs performing very G rated stuff. I not only cross the line I fall over it several times.  We make people like have orgasms and screw chairs and then we do some dirty stuff too.

I not only cross the line I fall over it several times.  We make people like have orgasms and screw chairs and then we do some dirty stuff too.

Money. Lots of money. I don’t know, I can’t fathom sitting in a room for 8 hours a day doing hypnosis and dealing with peoples problems when I could just come here and have an absolute blast at work everyday. For me that’s what it’s all about.  Having a good time.

For me that’s what it’s all about.  Having a good time. 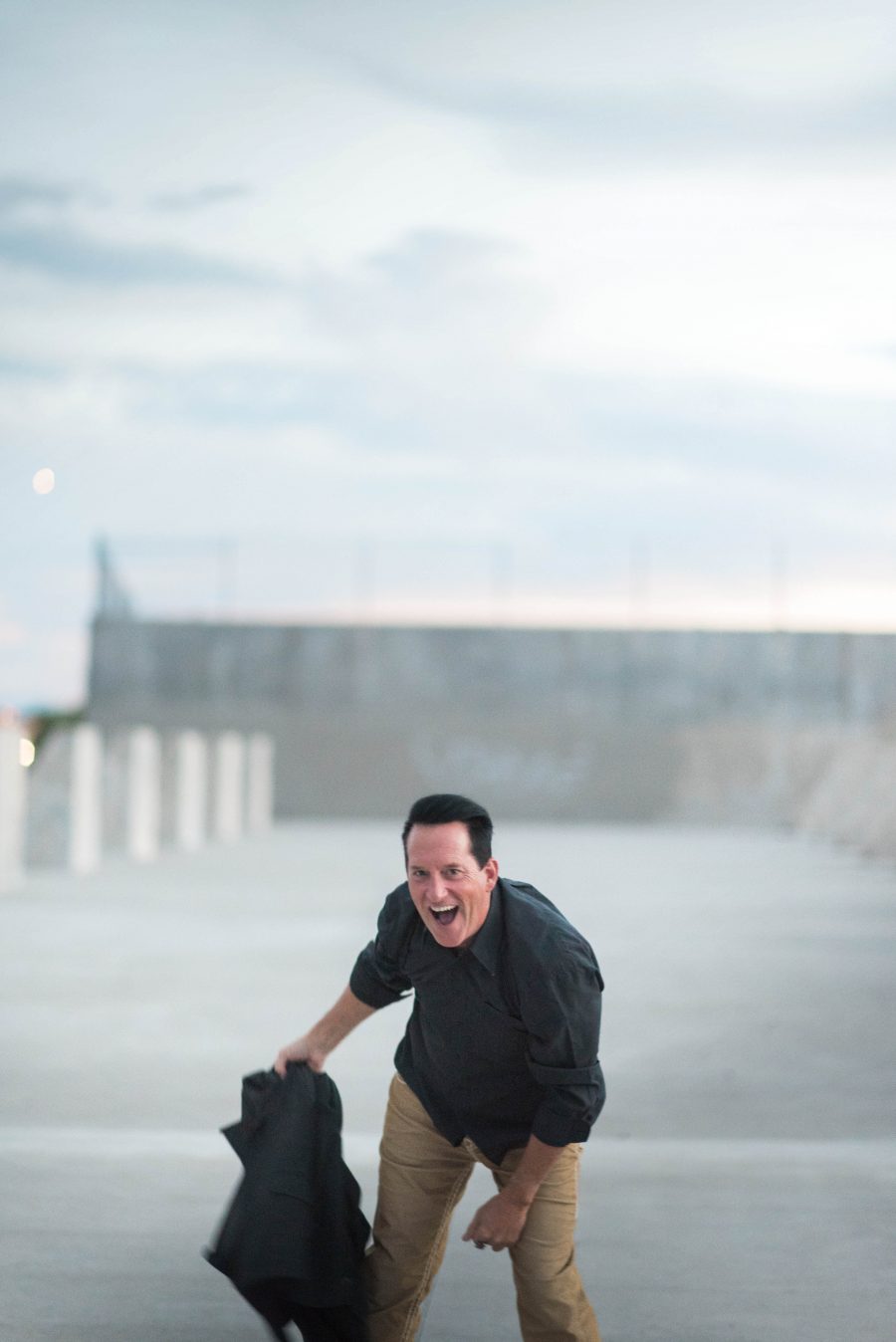 How did you come up with this show? Was it all you?

It was all me  but  I had help from family. And I also traveled with a bunch of really cool people at the beginning of my career including my brother Jeff and Cameron.  And they are equally as messed up as I am.  What we would do is go to a venue and do a show and get to be really good friends with all these people from the venue. So we would sit down and have a drink after the show.  Sure enough someone would say hypnotize me! So I would hypnotize them.  And we would sit around and write new material that way. Because you can’t practice a show like this. You can’t rehearse a show like this.  You do it on the fly and change it up every night. That’s how we would come up with new material.  And my brothers are just as twisted as I am and we had a great time. The road was a very fun time.

What do you say to the non believers?

Well first off I don’t care.

And then I’d say, try to do a little bit of math in your head here and figure out that if you put 10 people up on stage… first let’s do some logistics.  I’ve got to do a show tonight that I do 5 nights a week.  So I’ve got to get people now. Somehow figure out who’s here.  Steal them away from their families and I can’t advertise. Then offer them a sum of money to do this stuff up on stage in front of their family and friends and really embarrass them.  Making people suck off beer bottles and stuff. So let’s go low ball figure and say $500. So now, I’ve stolen somebody away from their family, I’ve convinced their family to buy tickets, I’ve got this one person here that I’m going to give $500.  Now I’ve got to do that 10 times. Now 10 x 500 is $5,000 in overhead I’ve now created for myself.  Now for the people that said no I won’t do it, I have to figure out a way for them to shut up. So they never ever speak or tell anyone on the internet or anything like that.  Then I got to do this 5 nights a week for 11 years and never get caught. DUUUH! No, it’s just so much easier to be real.  It’s so much simpler. And it is real which makes it really handy to be real.

VGB: It’s true. Probably why you’re so successful. Because everything is so authentic and genuine.

Thank you. It is. It’s a different show every night.

Do you ever plan on retiring?

I don’t see retirement in sight. A long as I can talk and I can walk I’ll do the show. Even if this goes away some day, which there is no end in sight for that, but if there is a way that this goes away then I’ll just do corporate dates and things like that. I don’t have to work I enjoy it.

What else are you passionate about? What do you love?

Well because the show has been around for over 22 years, over 11 years at The Paris, the creative aspect is really really difficult for me. And I’m to the degree where I’m working on getting laughs with pauses. That’s what my goal is. If I can say nothing, and get the audience to laugh, you know, that’s the type of nuances I’m working on in the show at this point in time. It’s non stop laughter.

Other than that, I started up a video production company a few years back called Avian Cinema.  We do commercial grade videography, photography, and we work with movies and do television commercials. That kind of stuff. We don’t do weddings, banquets, and bar mitzvahs. We specialize in aerial.  We were one of the first people in Nevada to be legally certified by the FAA to fly a drone.  I actually have my real pilots license.  I had to get that in order to fly a drone.

But I own a hair salon too.  It’s called Exposed. It’s catty corner to the SLS on Las Vegas Blvd. And I own a mobile billboard company and wide format print shop called Hootie Patootie Signographic.  We do the mobile billboard trucks up and down the strip.  So between that and the hair salon… it’s a lot of things… and I still have time to make people hump chairs.

Would you ever do a reality tv show again?

It’s funny because we’re actually in the process of pitching a tv show right now but I can’t talk about that. We’ve already shot a pilot. Stay tuned!

What else do I not know about you?

I have a huge… sense of humor.

Going to his show is a MUST when you’re in Vegas! You can buy tickets here or really anywhere! Make sure to follow Anthony on Instagram @AnthonyCools and Twitter @TheAnthonyCools or you can check out his website here! 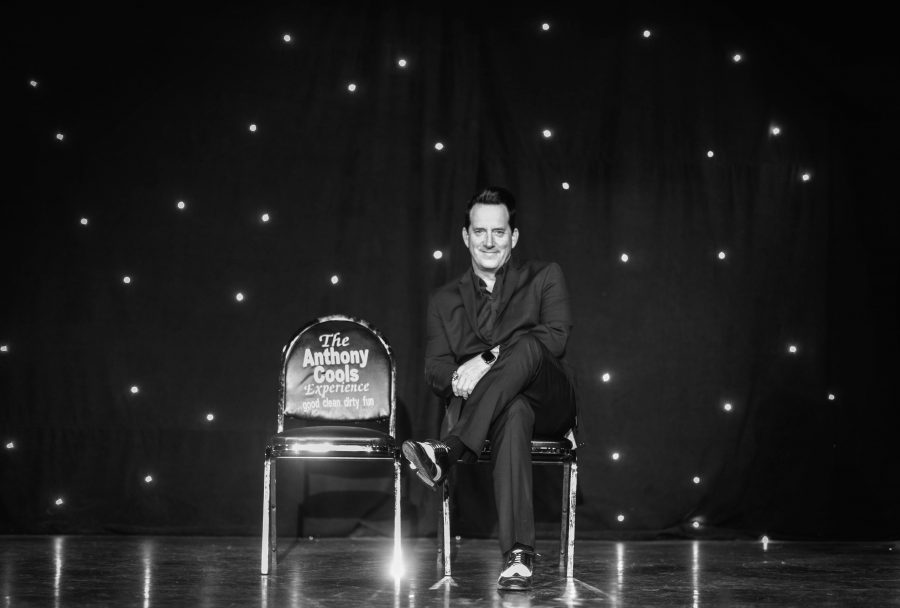 Read Next: The Easiest Way To Book The Best Show In Vegas + How We Ended Up On Stage

Special thanks to VIDDEDIT for helping me edit the video above! They were super fast with edits, prompt, had great follow up, and excellent communication skills.  I would definitely work with them again! Check out their website here and get 10% off your order!

How Suiteness Opens Doors To The Suite Life + a $1M Giveaway

Karynda from CMT’s Party Down South 2 is Verbal Gold