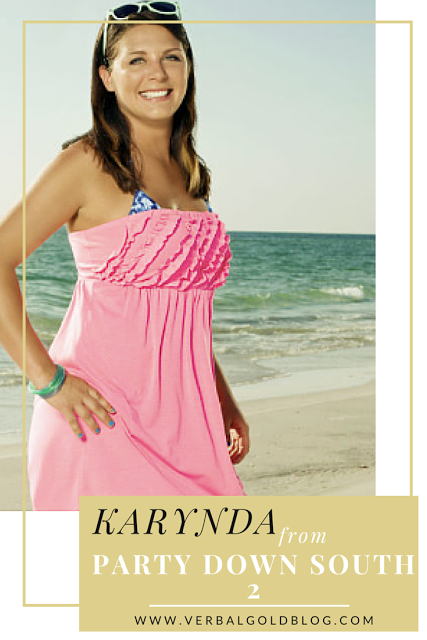 Karynda – She’s a sweet tea lover whose favorite things include line dancing and beer. She can definitely hang with the guys and ain’t your typical Southern bell.

Literally had so much chatting with Karynda. She is one of those girls that just makes you feel like you’ve been best friends for years. So comfortable and so genuine. Basically exactly like what you see on TV. Which I love. I would definitely hang out with her and even at a bar! #neveradullmoment

We had a blast chatting. Me with my White Girl Rose wine and her with her Natty Light catching up. I don’t know about you but I’m hoping and wishing with all my fingers and toes crossed for another season of Party Down South 2!!! That show is crazy and I love it! Addicted.

Just re-watching our chat makes me smile. 1. I’m so stupid and have no filter and 2. Karynda doesn’t care and she’s awesome. You can catch a quick glimpse of our convo below!

our face time action
Ady – Teach me your dance moves! was the first thing I managed to blurt out.  So Karynda without skipping a beat got up and immediately showed me how to do her famous cardiac dance moves.
Karynda – Do a little head and shoulder action move your whole body your eyeballs shake your booty turn around and go into cardiac!!

Ady – What’s a typical day in the life of Karynda when you’re not filming Party Down South 2?
Karynda – I do nothing.  Working 12 hour shifts and just come home.

Karynda – But now they watch the show every week and they are the biggest fans.  They aren’t even mad about what I do.

Ady – If you could add or trade one member from season one of Party Down South with season 2 who it be?

Karynda – Maddy and Tiffany are too similar to me and my mom thinks we’d butt heads but I’d go with Tiffany maybe… well I’d probably add Walt because he’s sexy even though I heard he’s a man whore!

Since Karynda’s part time job is working at a dry cleaners and with Walt always wearing the same outfit (in my white t) I think they would make a great match! So settle down Walt!

I decided to make a PSA for dating Karynda! She’s not currently dating anyone so line up boys! According to her she’s very very picky. You must live in NC, have a job, be taller than 5’6, bigger than her, trucks, sports, facial hair, beer drinking (all a plus) basically a mans man. A little tip on how to get her attention: tell her a funny joke, tweet, fb, or instagram her, don’t just come out and say you want to meet her. Introduce yourself first and have some charm.

Ady – What’s something that hasn’t aired you wish they would have shown?
Karynda – As she took a gulp of beer, burped, and laughed out loud, shenanigans with Raven for sure!

Ady – Anything you wish they wouldn’t or would have aired that may have portrayed you differently?

Karynda – They aired the real me but they don’t show my serious side or the fact that I cleaned the house all the time.
Ady – Does CMT hook you up, give you money or pay you to be there while filming Party Down South 2?
Karynda – Everything is taken care of.  Food and beer are provided but we have to pay for our own bar tabs.
Ady – So if they’re paying and you could pick out any beer or liquor you’d still choose Natty?
Karynda – Yes all day!
Ady – Were you ever camera shy or did you jump right in?
Karynda – I jumped right in and got used to it super quick.  Literally jumped right in … the pool all micked up and ruined a $2,000 mic with water damage.  Whoops.


Don’t be shy!  Reach out and say hey! Tweet

Written By
Ady
More from Ady
We interrupt your normal programming here to bring you the Bruce Jenner...
Read More