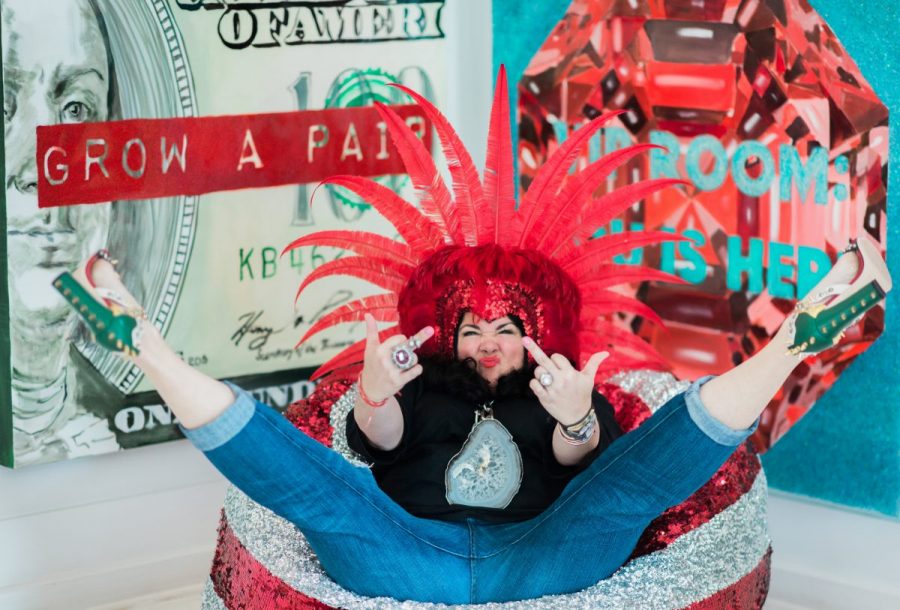 Hey guys! Jennifer and Ady here! We are so excited to finally share this post with y’all (insert salsa dancing girl emoji -that’s the dance move we do when we’re excited)! It’s about one of our F A V O R I T E humans in the whole wide world… guess who? Artist Ashley Longshore of course. Duh. Who is Ashley Longshore you ask? What’s wrong with you? Do you live under a rock? The best description of Ashley Longshore was given by one of her Wall Street collectors (whom we imagine looking a lot like Leo in Wolf of Wall Street because we romanticize everything). He called her a “modern Andrea Warhol” (peep this article) which is such a perfect description of her art/vibe. Like Andy Warhol, her art is very vibrant/provocative/humorous with an emphasis on pop culture, and also like Warhol when you look at her pieces they are all so different yet so distinctively “her”.

There’s literally so many great pieces but one of our favorites is her new painting of Abe Lincoln in a Gucci jacket… with a glitter beard. It’s everything y’all (if you haven’t seen any of her work yet slap yourself then go check it out here? www.ashleylongshore.com and check out the Gucci Abe on Insta?@ashleylongshoreart). While her art is insane/what dreams are made of, she is so much bigger than her art. Ashley has an energy that takes over the room and is extremely sharp witted, with a sense of style that eerily resembles our “If I had Yeezy money how I would dress” Pinterest board. She is covered in statement piece after statement piece- Gucci, Prada, Chanel, you name it. Ashley Longshore is literally and figuratively Gucci AF. Though she now lives in New Orleans, she was originally from Montgomery, AL and we feel such a kinship to her being fellow Southern bred lady bad asses. She really inspires us and everyone to be yourself.  To share your sparkle with the world despite the pressure to “be a lady” in the Junior League twilight zone we currently reside in. WE’RE FEELING SO INSPIRED AND PUMPED just talking about her! How about y’all? Oh we need to calm down? Ok.

If you are interested in learning more about Ashley Longshore and her art, check out her website. If something is wrong with you and you aren’t into art, check out her Instagram – she is hilarious and posts memes on memes on memes that will fire you up about life. She also posts videos of pandas eating snacks and if you aren’t into that something is for sure wrong with you and we can’t do anything else for you. Also check out the interview with Ashley below as well as our shoot at her awesome studio in The Garden District (which looks like inside of our heads – resembling the Willy Wonka Factory but glitter instead of candy). I SAID GOOD DAY! (Fez Voice) 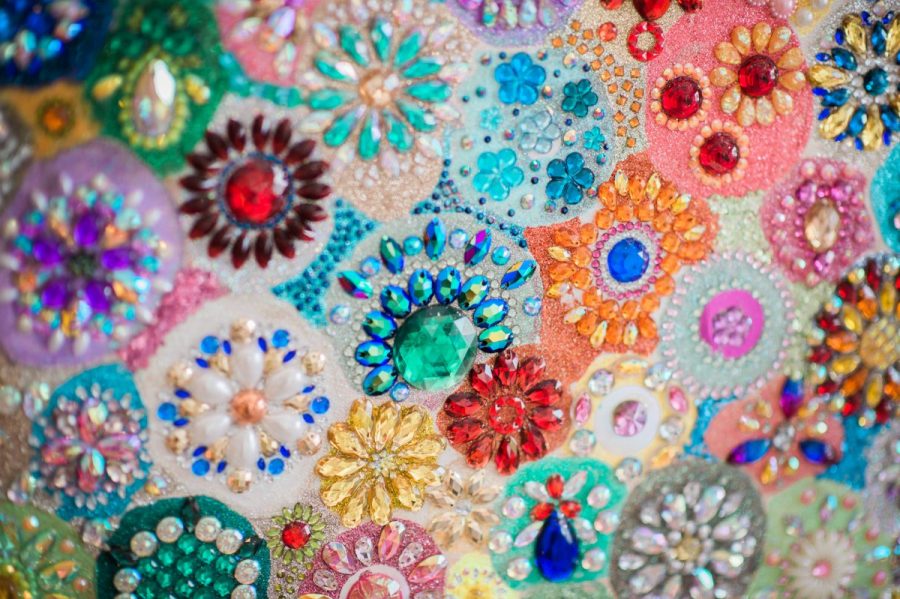 These are a few of our fave paintings by Ashley Longshore

We will have one of her paintings hanging in our homes very soon!  I mean – as if you needed more proof that she’s a boss ass bitch with some major skills, her bestie Blake Lively raves about her work all the time.  Ashley was actually working on this piece when we stopped in her studio gallery.  This painting is to die for! And yes those are thousands of sparkly jewels. Obsessed.  Blake definitely has good taste in artists and friends because Ashley is amazing! 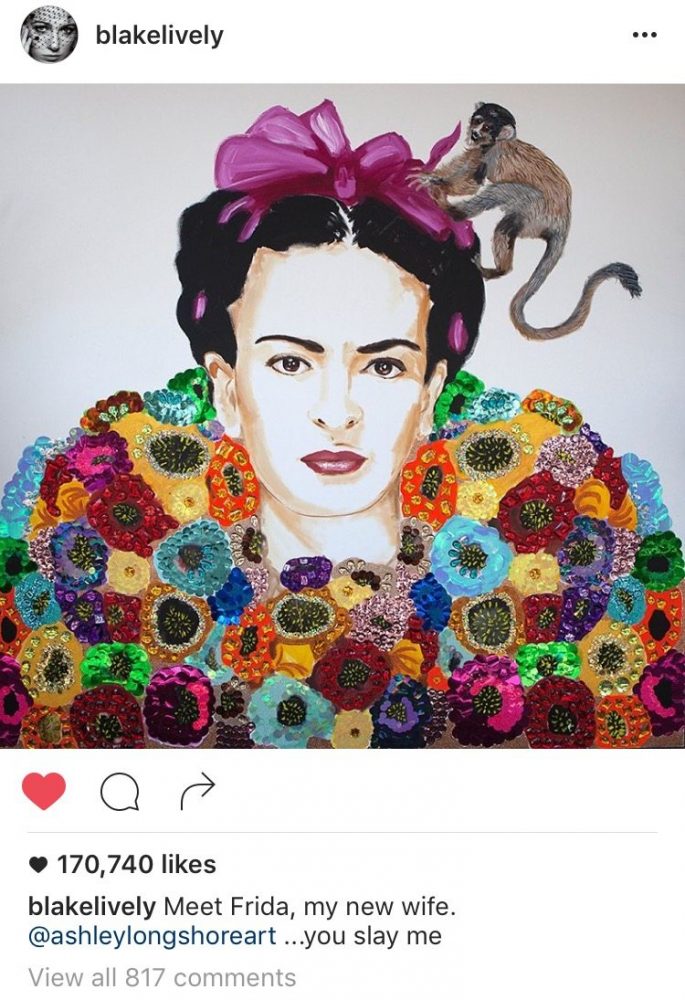 Ashley Longshore is an American woman who has the opportunity to do whatever the hell she wants!  She’s an amazing artist, a creative mastermind, a boss bitch entrepreneur, but more simply put, enthusiastic as fuck, and an example of a modern Southern woman.

We covered so much in our interview with Ashley Longshore and had a blast doing it.  We learned what inspires her, what brings her joy, what artists to be on the lookout for, being an artist in the social media world, her social media game, what’s on her walls at home, and her creative outlet!

We even asked her who she would cast to play herself in ‘Ashley Longshore: Fuck basic bitches the movie’ and you’ll never guess who she said!!!

Watch our interview with Ashley Longshore below! 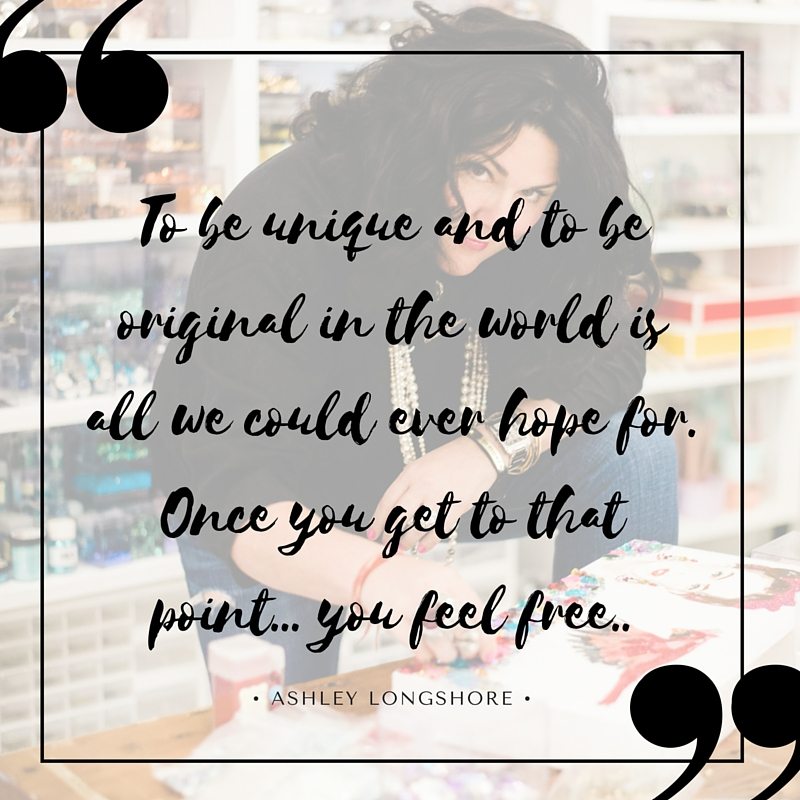 On being yourself.  “It’s a difficult thing. A lot of that happens with crying yourself to sleep at night, trying to find your own voice in the world. But I think if you stop and say who are my role models? Who are the people I look up to? You might see what you love about them is that they’re different than everybody else. Some of the hardest things that we do is to go, this is what makes me weird. This is what makes me different.  But this is what makes me so fucking awesome.  Because this whole society has built us to have self doubt.  I’m not skinny enough. I’m not rich enough. I don’t live on the right street. I don’t have the right car. My diamonds not big enough. This is what so much of my artwork is about. So for me, to embrace it and say fuck it.  This is how I’m going to live. To be unique and to be original in the world is all we could ever hope for. Once you get to that point… you feel free. And it ain’t got nothing to do with money. It’s about confidence. Confidence is the sexiest thing …anybody could ever have.”

“I can only be me.” – Ashley Longshore

So what’s next for Ashley Longshore? Let’s just say…. be on the lookout for a new book!  She’s officially adding author into the mix and we for one can’t wait! 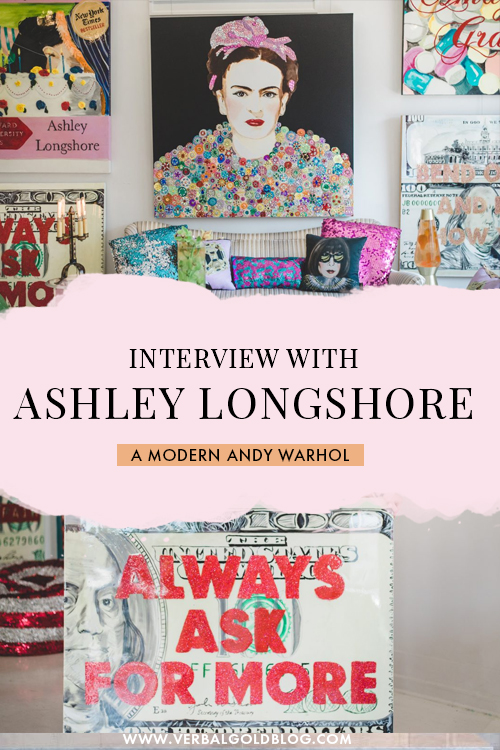 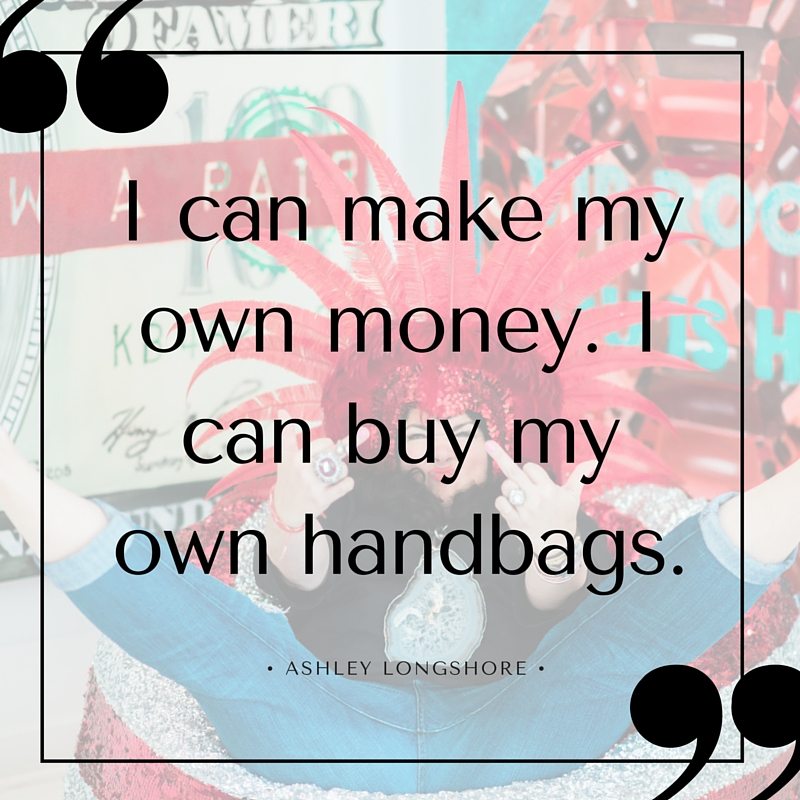 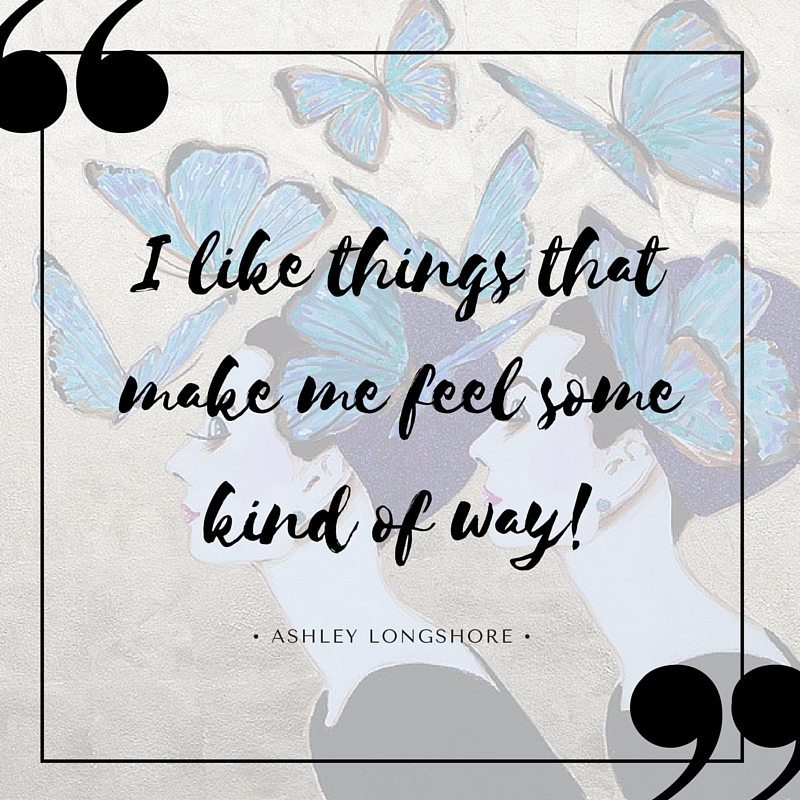 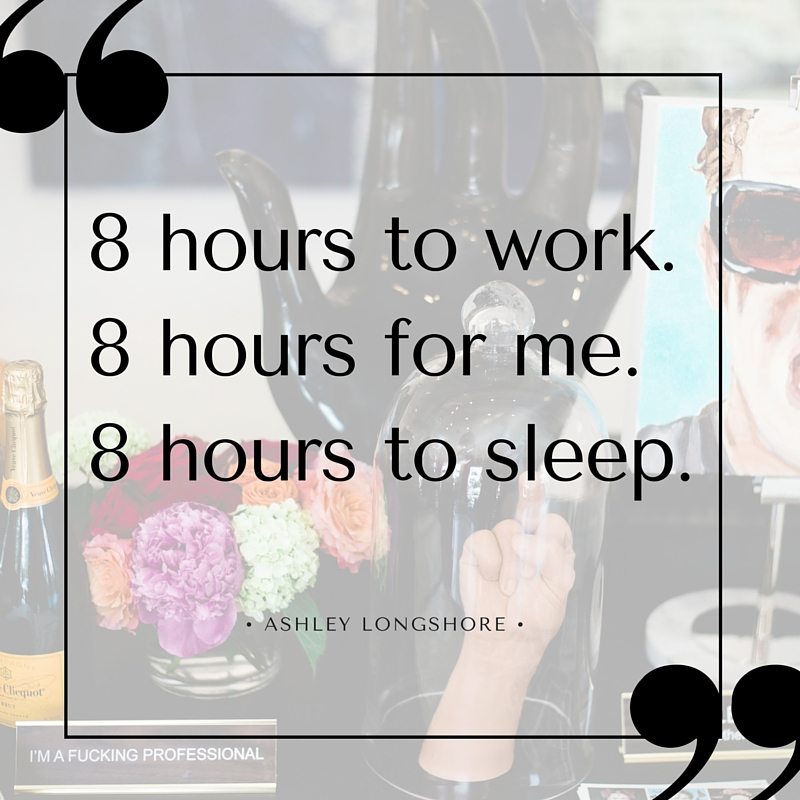 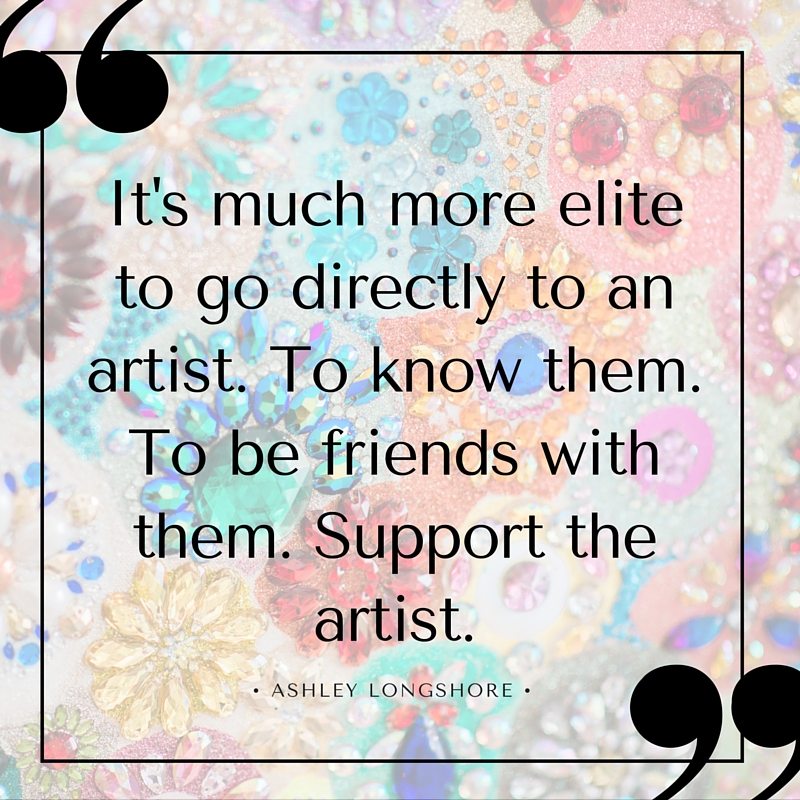 Pin or tweet your favorite quote of Ashley’s above and make sure to tag us @Verbalgoldblog!

What’s your favorite Ashley Longshore piece? We’d love to hear from you!  In the meantime, if you need us…. 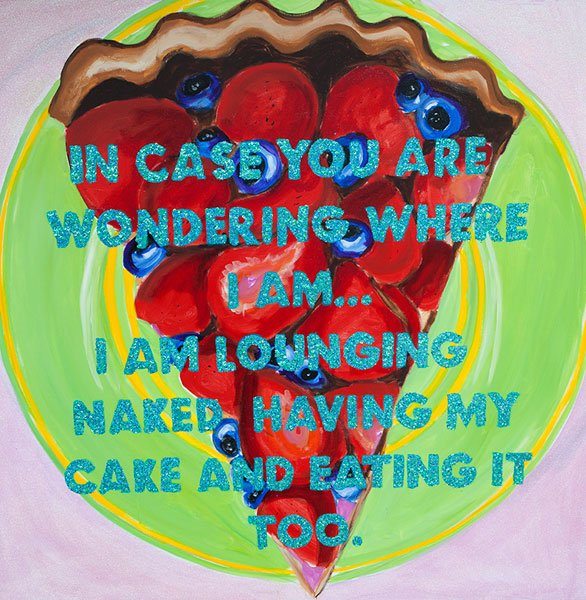 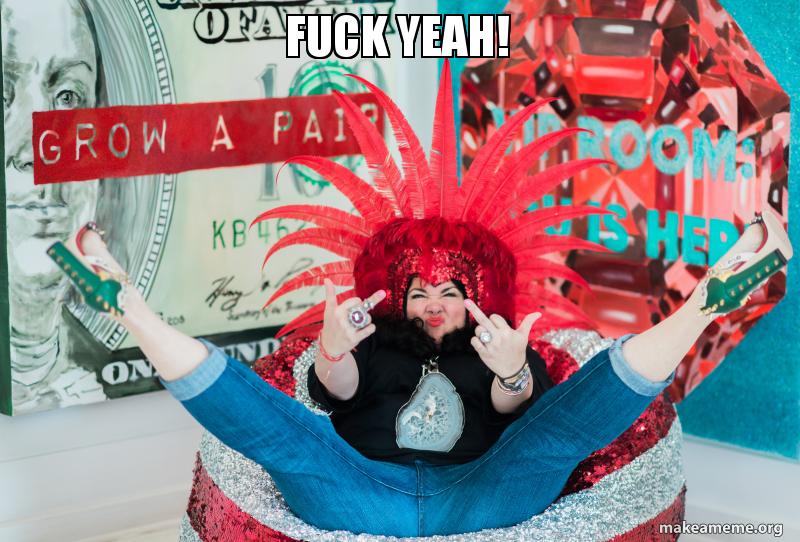 Written By
Ady
More from Ady
How to get out of doing the dishes… Better yet.  How to...
Read More