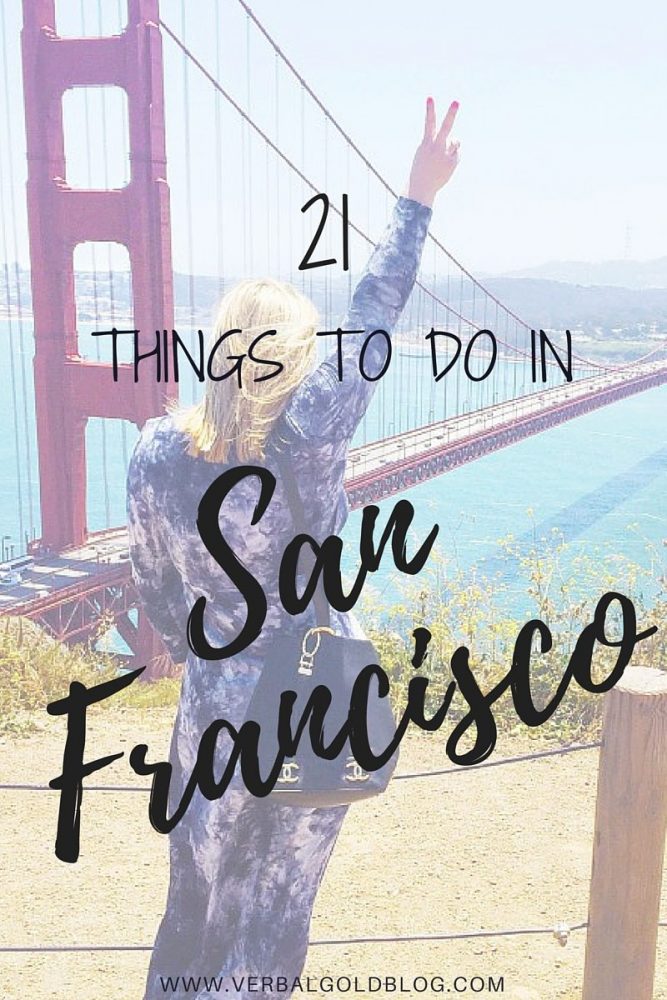 I left my heart in San Francisco. It’s true. I grew up in Atlanta, went to Alabama, and then moved to SF to “see the world”. More on me here but anyways, living in San Francisco was eye opening and I fell in love with the city! I loved the atmosphere, the community, the wine (oh the wine), and the fact that you could go anywhere and do almost anything within a 3 hour trip. Whether you wanted to go to the beach or the mountains or just have a little fun, Vegas, Tahoe, and Napa were all in an arms reach. There is so much to see and do in SF that you never stop. The next fun thing to do is literally right around the corner or up a hill. There is never a dull moment in San Francisco!  It’s a great city. I actually have goosebumps writing this now. The most memorable moment for me was when the Giants won the World Series and Every. Single. Person. in the city came out to celebrate in the streets. Together! It was incredible.

SF is such a transient city that it’s so easy to meet people and make friends. I moved there knowing no one and ended up with some great room mates, great stories, and some friends that I still connect with to this day. One of which is a bad ass contributor for the blog (Kelly!).

I have so many favorites in SF but this list is ‘my visitor list’ as I call it. When my friends and family would visit me we’d have to check off everything on this list for them to get the full SF experience!

In no particular order, here are 21 things you absolutely must do while in San Francisco!

If you’re on the Embarcadero in the downtown financial district, or by the ball park I recommend popping on the Bay Bridge and heading to Treasure Island for the most amazing picture you’ll ever take!  The view of SF from TI is one of my favorites! 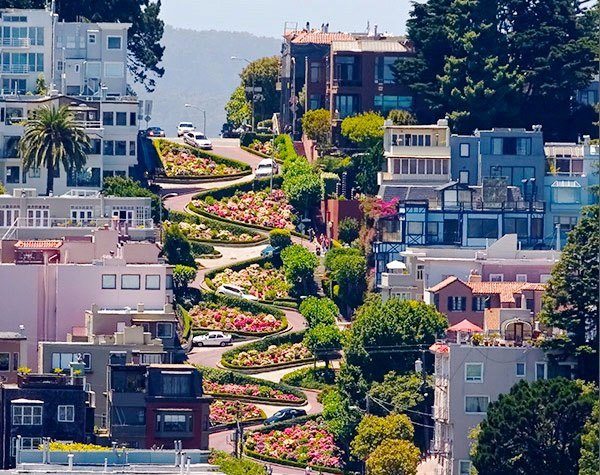 Lombard Street is known for being the crookedest street in the world and attracts tons of tourist every day in San Francisco.   It’s a must to either drive or walk down Lombard.  The cable car drops you off at the top!  Bring your camera!  You can see great views of Coit Tower going down and Lombard Street going up! 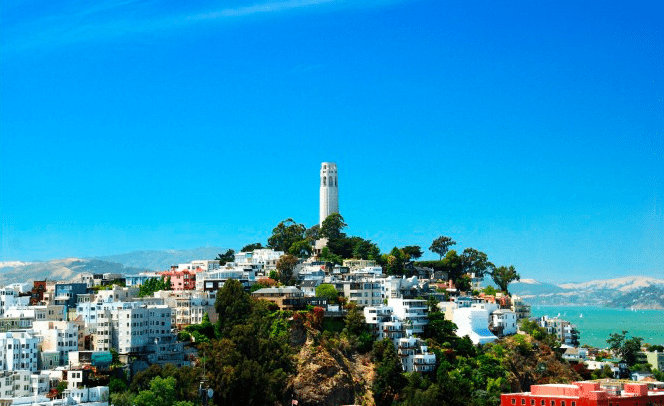 Coit Tower is a 210 foot tower in the neighborhood of Telegraph Hill.  It’s a great place to see 360 degree panoramic views of SF!  A great place to pause and take in all of San Francisco. 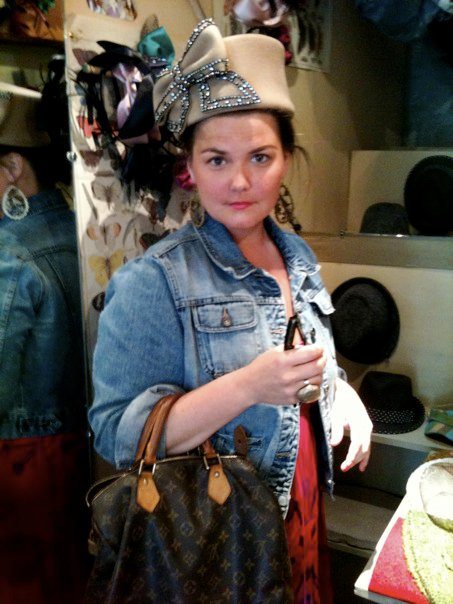 The shopping in SF is amazing.  Head to Haight for the vintage, hippy t’s and eclectic outfits at Ambiance.  Ambiance SF is probably my most favorite store ever and currently you can’t purchase online (only from their instagram) so stock up when you go!  The Marina has a ton of cute shops along Chestnut, Fillmore, and Union Street.  Sephora, Lulu, William-Sonoma, ZGallerie, and Urban Outfitters are a few staples.  My favorite place to get gifts is Toss on Chestnut.  It’s a must!  You can also head down to Union Square for more high end shopping or Market Street downtown! 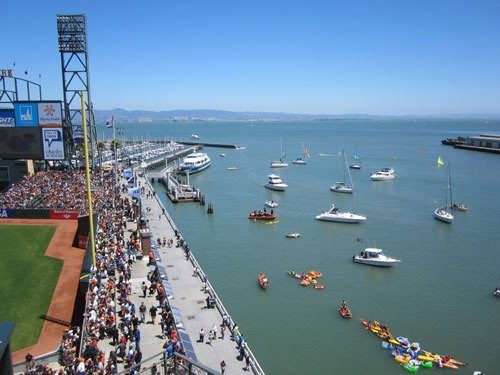 If you are lucky enough to be visiting while there is a game going on get tickets immediately.  It’s a crowd like no other and the atmosphere is insane.  Not to mention before and after the games are a party in themselves – head to MoMo’s across the street for a drink!  As cheesy as it sounds, you’re one with the people. The community is so supportive and so much fun!  Don’t forget to wear our colors.  I’ve never gotten to watch the game from the water but a ton of people do and it’s such a cool view!

Historic landmark. Amazing photo opp. Throwback to the Full House days and a fun time!  Not really used for transportation. lol Just don’t wait on Powell and Market to get on.  I usually hop on at the Wharf and when it stops at Lombard just hop off.  It’s such a pretty view!  Just make sure to pay attention to the “gripman” haha I love that name. More on how to ride cable cars here.

Head to the wharf to experience the Sea Lion Center at Pier 39, Boudins bread and fresh seafood [read clam chowder in a bread bowl is life], the bush man (he will scare you and you must give him $1), and drink up world famous irish coffee(s) at The Buena Vista (one of the oldest bars in the city)!  Ghiradelli Square is also there so hop in for some chocolate!

Check out the SS Jeremiah O’Brien at Pier 45 to see where the engine room scenes from The Titanic were filmed! 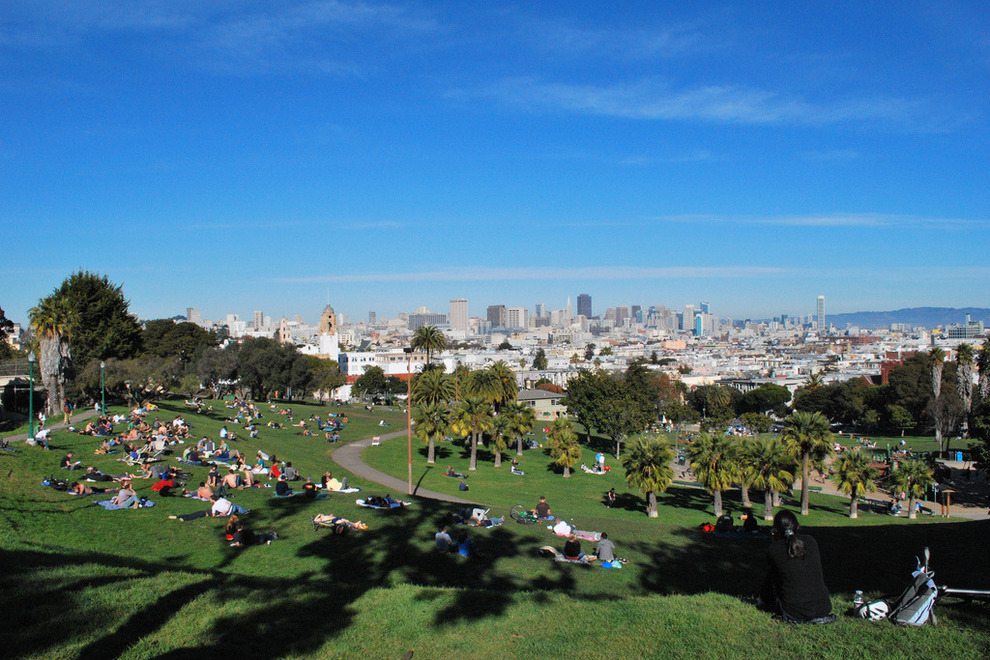 Check out Dolores Park and the Dolores Mission while here.  Eat and grab a drink at The Phoenix! The mac and cheese is my fave with their chicken tenders! But there are so many good restaurants and hipster coffee shops in the Mission.  Pop down Clarion Alley for the perfect blogger shot in front of different street art.  The entire Alley is painted and amazing!  Dandelion Chocolate Factory and Urban Putt are both super fun!  Bi-Rite Ice Creamery is definitely a hot spot.  Beware of the lines. End the day with a drink at Clooney’s or the rooftop bar El Techo! 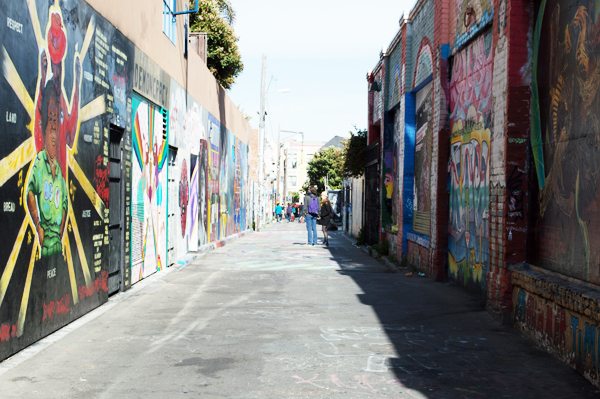 Head to Alamo Square to see the iconic painted ladies! “When you’re lost out there and you’re all alone / A light is waiting to carry you home…Shubadu bah bah bah!”

If you want to see the actual Full House House head to 1709 Broderick Street.

11. Drive or Bike Across the Golden Gate Bridge

And play the Full  House theme song while you’re at it. 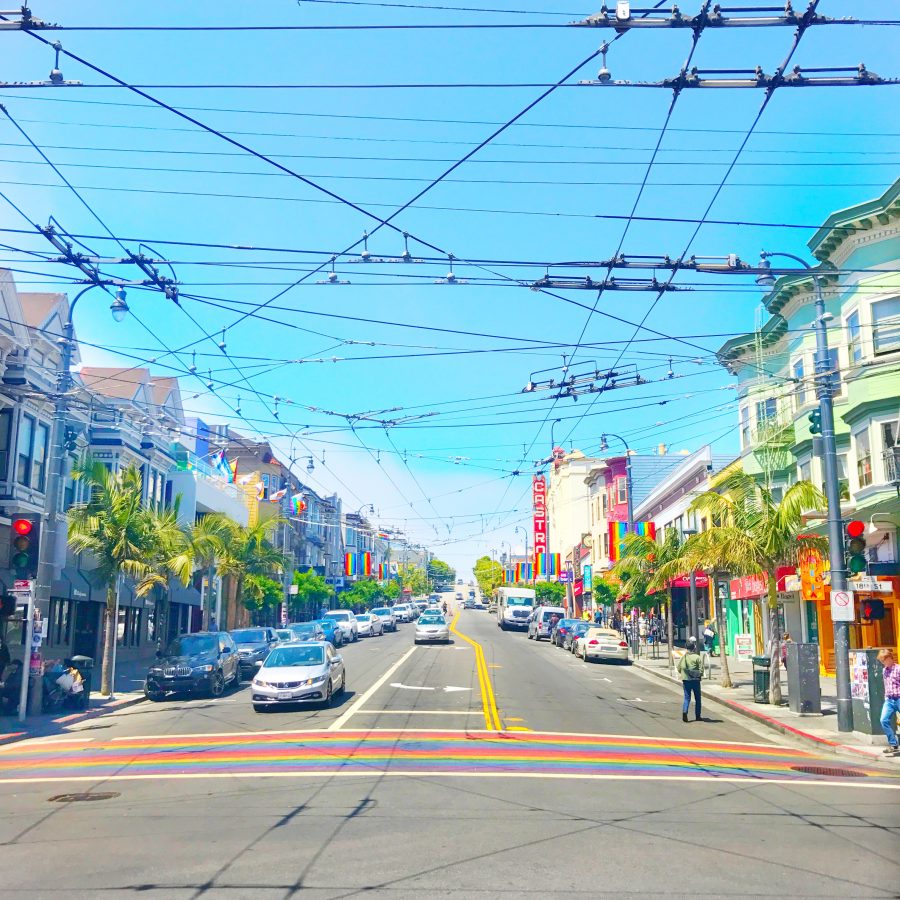 Chinatown is definitely worth exploring! Try the dragon beard candy, stop and eat, drink at Buddha Lounge, shop a bit, and check out the street art!  If you’re brave enough I highly recommend getting acupuncture while you’re there! It’s legit. You’ll see so much culture in just a few streets.  I love all the Lucky Cats in the stores and the Maneki Neko story that represents happiness and money or is simply inviting people in. Take it all in! 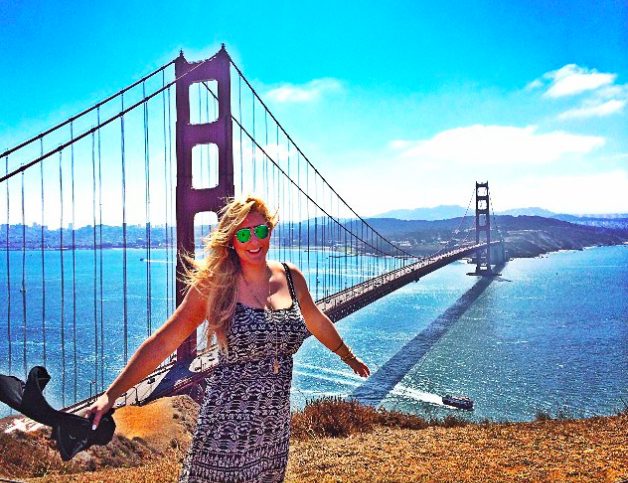 The ultimate tourist picture!  PS. The winds are strong so don’t where a dress.

Take the ferry to Tiburon and have brunch (more like a happy hour / Sunday Sunday vibe) at Sam’s on the water!

So many things to do here! Embarcadero farmers market is one of my faves! Eat your way through the ferry building! Financial district bars are great for trolling the dating scene after work during happy hour. Waterbar is an amazing restaurant, a bit pricey, but definitely worth it! Head to the Transamerica building and the little park underneath it! 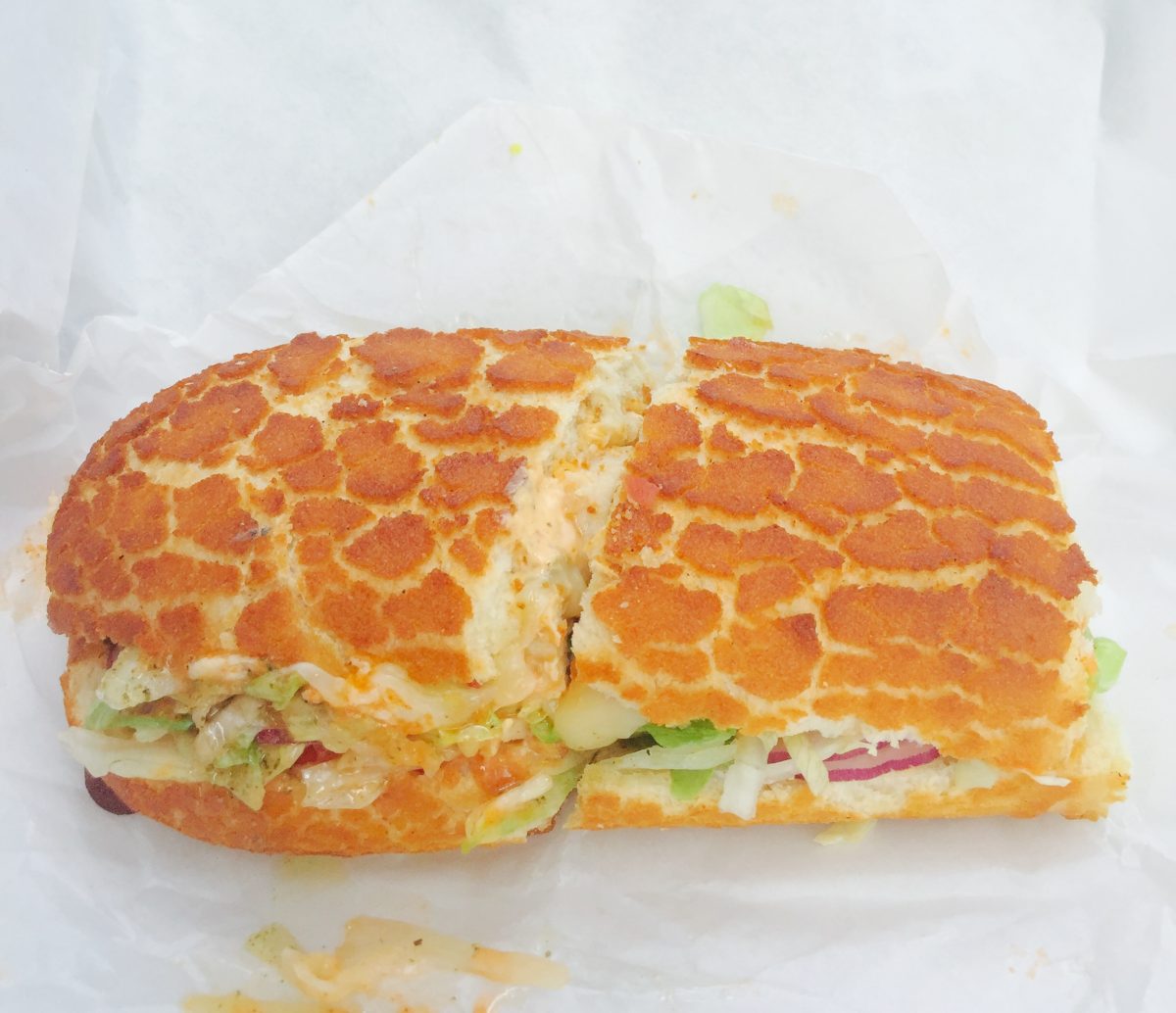 Mama’s Breakfast, The Wharf, The Sandwich Spot in the Marina (#9 Hot Chick – ever heard of Dutch Crunch bread? It’s a must!), Brunch at Tipsy Pig, Ikes, Top of the Mark, Tonga Room & Hurricane Bar, Gary Danko, Boudins, Embarcadero Water Bar, Bit Rite, Mr.Holmes Bakehouse, The Ramp, The Stinking Rose and so many more! Oh and Taco Tuesday at Nick’s Crispy! House of Prime Rib (where all the Giants players eat)! Mmm. Literally eat all the foods! 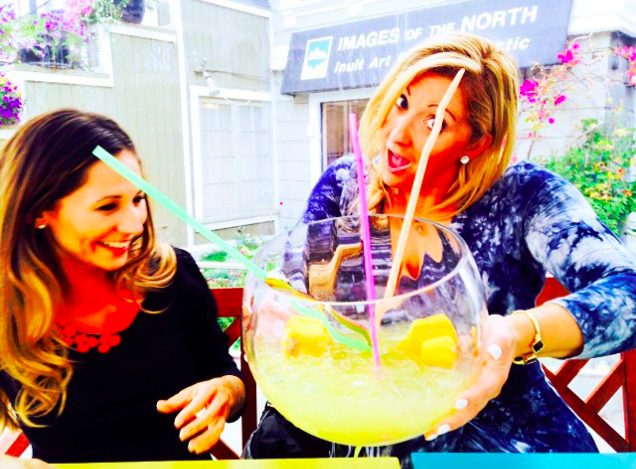 Bar tour on Chestnut and Union Street // Literally you can’t go wrong.  Go in as many bars as you can! I love them all!  Tipsy Pig, Monaghans, Silvercloud for Karaoke, Mona Lona for pop a shot, Bar None for games like beer pong and flip cup!

I also recommend hitting up the bars in North Beach (Grant and Green), Polk Street Bars (Aces, look for my picture on the wall), or the Financial District for happy hour “fancier bars”.  Make sure to try out Bourbon and Branch but make sure you know how to get in first!  Anchor Brewing ‘s Taproom, The Interval, Kozy Kar, Red’s Java House, The View Lounge (yeah you get exactly what it says… a great view)! Fernet is a must so you have to try it! 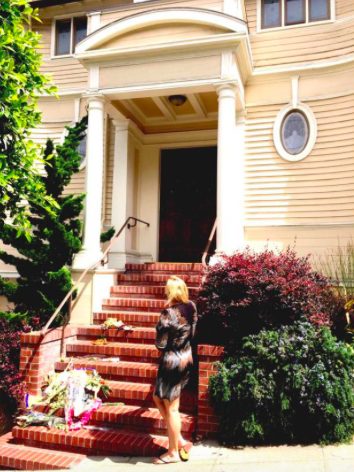 Take a pit stop by the Mrs. Doubtfire house to pay respect to Robin Williams, reflect back, or write a sweet note on the tree or one of the rocks. I love that they say the actual home address in the movie. 2640 Steiner Street.

Head to Saint Paul’s Catholic Church to see where Sister Act was filmed.  Herbie was filmed racing down Scott Street in the Marina in the movie Love Bug!

I love the Haight! There are so many dope stores and restaurants here.  Make sure to check out 710 Ashbury at Waller, just above Haight Street to see the Grateful Dead House and the tree in front where fans write messages to Jerry!

Game changer. Literally the best time ever! A dress up party parade!  Bay to Breakers is a must!

Read More: The Iconic San Francisco Bay To Breakers 2017 Recap And Why Everyone Should Experience This In Their Lifetime

Read Next: The Ultimate 3 Day Guide to Napa + a Free Travel Itinerary 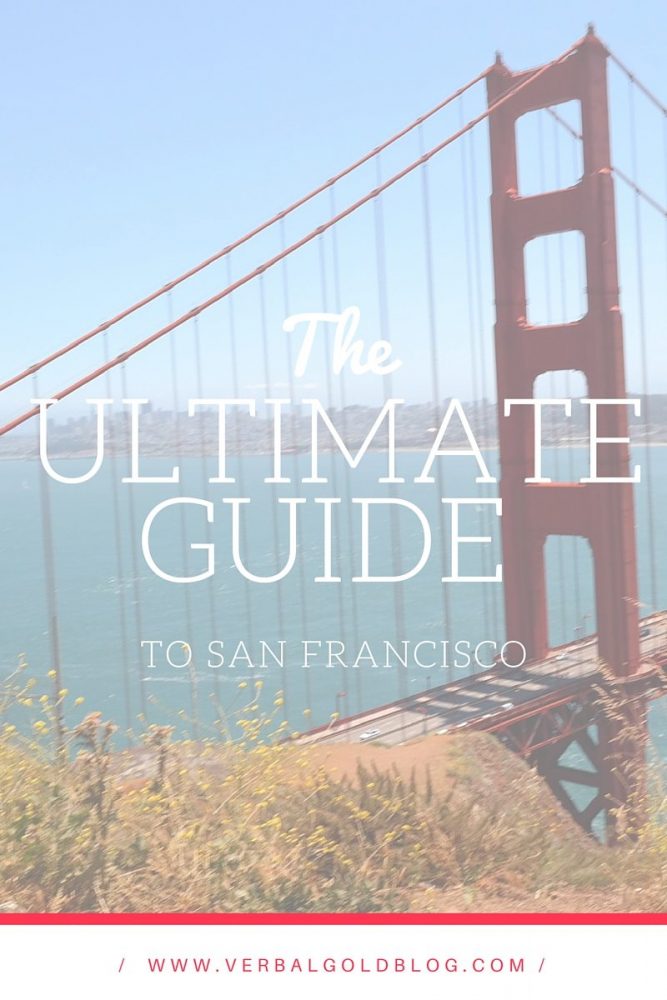 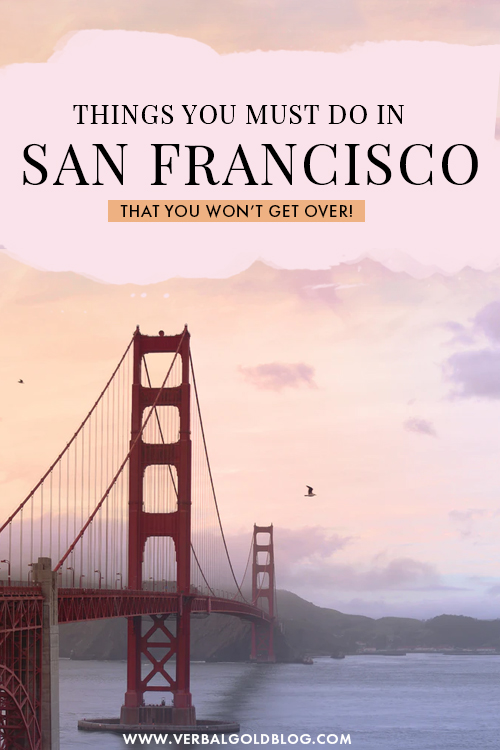 Written By
Ady
More from Ady
So after being apart for a whole year, we...
Read More