My MIAMI Travel Disaster + What NOT To Wear On A Plane

Let me tell you about my Miami travel disaster…
It all started on Monday morning.
First off, I’m NOT a morning person… AT ALL.  After hitting snooze about 5 times I finally start to make moves!
The only way my mom was able to get me out of bed in high school was cooking breakfast and turning the lights on in my room (and that only worked sometimes) I’m a tough cookie… and ADD.
ok so I’m back and awake … barely… at this point, rushing to pack and get to the airport.
I get there and these two girls (who have probably NEVER flown before) are dilly dallying in the security line… Taking FOR. EVEERRRRR.
So I was all like…

It was like these chicks were moving in… Two bags each and 10 bins! NO JOKE They lined up 10 bins on top of their two “carry ons” SERIOUSLY They were at the front of the security line and I was alllllllll the way back behind item number 13… it was a joke… she’d move the first bin closer to the scanny thing then have to walk all the way to the back and move up each of the 10 bins closer to the x ray machine… I mean

I’m not a pro but I can get through security in 10 seconds flat… and 30 minutes had already gone by.
When I finally got through I was like

finally!
Unfortunately I was behind them walking to the plane train too and just as this little 5 year old boy ran past them to ride down the escalator yelling WEEEEEEE there was another hold up… She wouldn’t get on the escalator… apparently afraid.  It took her at least 5 tries to find “just the right step”
Finally as soon as I had the chance I broke free and basically ran down the jet way like this:

Next, onto my flight… I got a window seat (which I love) and usually I luck out but this time… not so lucky.
1. An old man, who probably hadn’t showered in a week and was obviously a chain smoker sat down RIGHT next to me.  I don’t smoke so I was gasping for air smashed against the airplane window with my little tiny air vent on full blast. 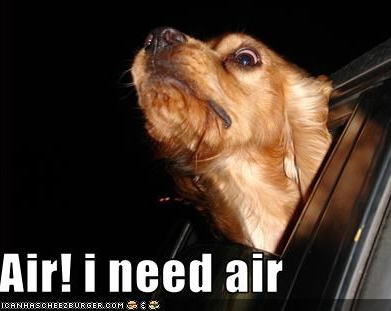 2. Me being a BAMA fan I will always yell ROLL TIDE to opposing teams and anyone wearing Alabama gear, whether I know you or not….  SO this Notre Dame fan starts walking through the plane and before I observe anything else… I yell Roll Tide… well I didn’t get anything back so I just thought ah.. bandwagon fan… then I get a closer look and I notice… he’s blind.  Just great.. now I’m a jerk yelling at blind people.
The stinky old man next to me was all like, “Did you know him?”
Seriously, does it look like I know him?  I guess most people don’t yell at strangers… but hey I’m from the South… that makes me friendly. I think.
So I quietly whispered, “No.” and he laughed and said, “Good for you!”  What does that even mean? Good for you?  Okay thanks now stop breathing your stank breath on me.

plus there was this rank smell circulating in the plane

And it was making me feel sick!  Yuck!
Probably because I was surrounded by crying babies.  Well at least I get a good side seat passenger…or so I thought…
Me: headphones on, emailing out work stuff, minding my own business  I clearly had a Do Not effing disturb me face on.
Him: (young, didn’t smell, wearing business casual) starts chatting me up, leaning over to look at what’s on my computer screen (commenting about my picture on my computer) being totally creepy and invasive and nosy.  After a couple of get to know you small talk questions goes, “Did you get sunburned today at the beach or is that red from your bra?”
I was wearing an off the shoulder shirt and who knows what that was from… could be both… regardless… I don’t know you… and even if I did… people don’t ask questions like that… right?  AND it was dark, a night flight, so how did you even see that?!?
It didn’t stop there… you can only imagine the random questions this guy threw at me totally disregarding the leave me alone face, short answers, headphones, and concentration stare like I was burning a hole in my computer.
He even commented… “Don’t you get tired of being on your computer?”… and… “only 10% battery left”… I mean… take a hint.
I was so excited to get off that plane!

Note to self: Don’t wear off the shoulder shirts or show your bra (even a little) on flights…
Note to those two chicks who couldn’t make it through security: Wear easy to get off shoes, limited accessories, one carry on bag, have your liquids already out and your lap top in a separate bin, don’t bring 3 jackets each, a hat, and a scarf.
That being said, I’m flying to New York at the end of the month… and my airport experience has to be better than this Miami travel disaster.
Head on over to our insta @VerbalGoldBlog and lets vent it out!  Has anyone had a worse trip or is it just me?
xoxo Ady

How much can you make renting your RV?