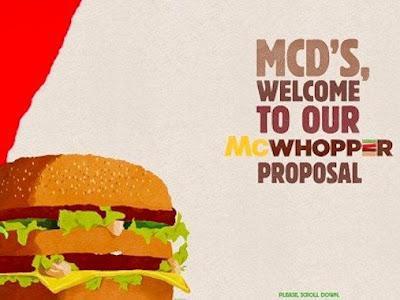 Y’all! I’m in advertising (you know, my real job) and even this surprised me! Burger King made a big play launching a website and taking out a full page ad on several major newspapers to get McDonald’s attention. Why you ask? They published a public proposal, “The McWhopper Proposal,” directed at McDonalds asking for peace. Well, for one day, September 21st!  Plus it’s for a good cause.  All to promote the Peace One charity! 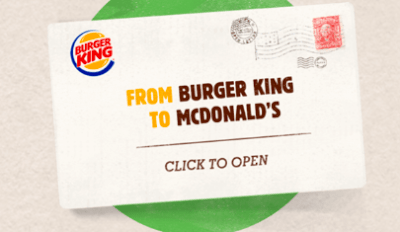 The idea is to come together and “meet in the middle,” which just so happens to be Atlanta. They would open a pop up location to join forces and combine McDonalds + Burger King ingredients to make a McWhopper burger.  Everything would be split down the middle and all profits would go to the Peace One Day charity.  They were also hoping to raise awareness for the charitable cause.

According to Business Insider, Fernando Machado, the fast-food chain’s senior vice president for global brand management, said it wasn’t just a PR stunt and that BK was hoping McDonald’s would agree to sell the hybrid burger September 21.  So, what do you think McDonalds said? Steve Easterbrook, McDonald’s’ CEO, responded to Burger King’s request on Facebook, and it wasn’t in favor of the idea. He said the two brands could do something bigger to make a difference, and suggested that the business rivalry between the companies shouldn’t be equated to the real pain and suffering of war. So which side are you on?  Clown or Crown?  #TeamBK or #TeamMD?  Y’all should see the comments on that Facebook post.  Most people seem to be in favor of BK, spreading the word about a good cause, and just curious to try a McWhopper.  McDonalds comment was a jab at BK for being small minded instead of global change.  Said they are not thinking big picture to raise awareness worldwide implying BKs idea wouldn’t make a difference.  Do you agree?
Side note, if you do decide to hit up a McDonalds – they now have their own snapchat image!  Boom.  And now I’m curious about every other fast food restaurant so can someone report back on those? Thanks! 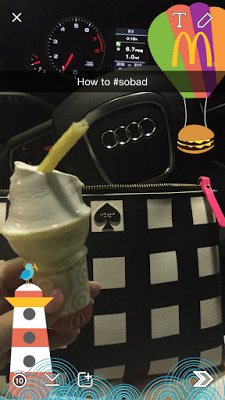 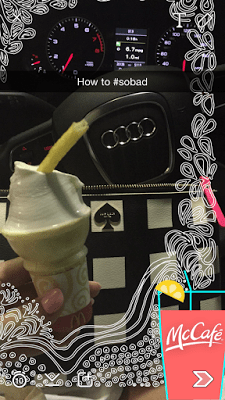 Written By
Ady
More from Ady
We had the pleasure of attending the South Beach Food and Wine...
Read More