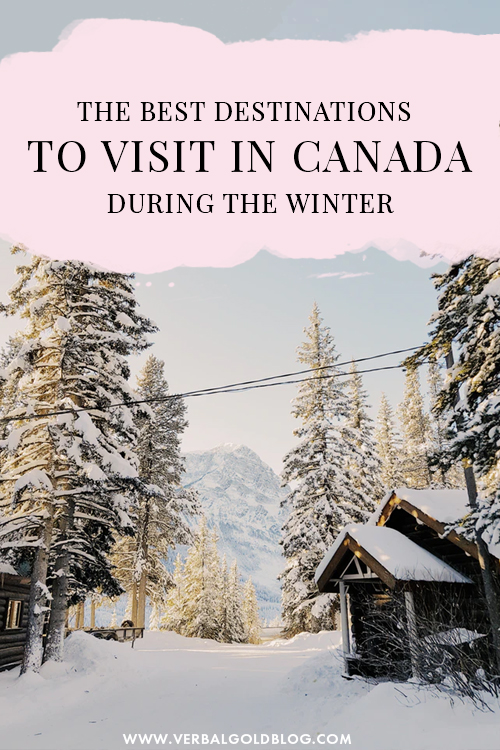 Thinking of planning a trip to Canada this winter? Most people opt out of visiting Canada during the colder months because, well, COLD!

However, we are convinced that Canada is one of the best destinations to visit during the winter. The entire country turns into an eye-candy of snowy peaks, ice skating rinks backdropped by the most beautiful surroundings, and host to some of the coolest winter festivals we’ve witnessed around the world.

Trust us, if you’re planning on visiting Canada, you’re in for a real treat. With that said, we’ve gathered up the best winter destinations in Canada to give you some inspiration on places to visit. From natural landscapes in the Rockies to quaint cities covered in snow, here are just a few of the best destinations to visit in Canada this winter!

The Best Winter Destinations in Canada

Whistler is one of British Columbia’s best well-known skiing resort, and while we definitely recommend hitting the slopes when you visit during the winter, this quaint mountain town has a lot more to offer its visitors during the colder season for non-skiers, too! The foodie scene in Whistler is next level, the mountain vies from Whistler Peak are unbeatable, and we also recommend checking out the nightlife it has to offer!

If you’re there during the holiday season, make sure not to miss Whistler Village at Christmas, when the entire city center lights up.

Set in the heart of the Rocky Mountains, the quaint mountain town of Banff is a must when visiting Canada in the winter. A visit to Banff gives you the chance to go ice skating at Lake Louise (ranked the most scenic ice skating rink in the world), go snowshoeing, dog sledding, ice walking through canyons, and more. If an adventure-filled winter wonderland destination is what you’re after, Banff is the way to go.

Ottawa is so much more than just the capital city of Canada, it’s also a city that turns into a breath-taking winter wonderland when temperatures drop. While here, you must check out its Rideau Canal Skateway, the world’s longest ice rink (which also happens to be a UNESCO World Heritage Site).

Depending on the time you visit Ottawa, there are also so many things to plan your trip around:

Accora Village Bed Race: An annual contest in which competitors dress up and race decorated beds across the ice.

The Niagara Falls are always a treat to see, but they put on their prettiest face when temperatures drop (plus, you’ll get to avoid the summer crowds!). A visit to Niagara on the Lake during the winter months also gives you a chance to attend the annual Winter Festival of Lights, North America’s most stunning light display.

Another must while here is ice skating in front of the town’s City Hall, as well as going on a winery tour to try the area’s icewine (yes, ICEWINE!).

If exploring cities is your jam, you’ll love strolling through Quebec City during the winter. The city sees a ton of snowfall once the temperatures drop, so you’re in for a real winter wonderland among cobblestone streets and drool-worthy European architecture. Quebec City is also host to the annual Winter Carnaval in Quebec, the world’s largest winter festival, so if you’re planning to visit in February, you can’t miss out on joining in the celebration.

If you’re rather visiting during the holiday season – the city won’t disappoint either. Starting in December, Quebec City lights up with decorations, tweaking lights, and an array of Christmas markets.

Once you’re done exploring the urban life, a short drive out of town will have you at some of the best ski resorts Canada has to offer.

Saint John’s is one of the best destinations to visit in Canada throughout the year, but it takes magic of its own when its Jellybean Row’s colorful houses get blanketed in snow. While here, make sure you don’t miss out on skating at the Loop at Bannerman Park, tour the Basicila, indulge in Jumping Bean’s live music, and go skiing at Pippy Park.

Even though Winnipeg might not be the first place that comes to mind when you think of a trip to Canada, the capital of Manitoba has a ton of things going on for her. Going for an ice skating session on the Red and Assiniboine rivers are a highlight of any winter visit to Canada, and if you’re visiting in February, make sure you plan your visit to align with Festival du Voyageur, Western Canada’s largest winter festival.

If you’re crazy about maple syrup (and you should be!), then Halifax is probably the best destination for you to head to. Set in Nova Scotia, a visit to this city gives you the chance to go skiing at Ski Martock, exploring Point Pleasant Park, tobogganing on the Citadel Hill, or going on a sleigh ride at Harfield Farm – all while gorging down on scrumptious maple syrup treats!

If you’re into get-away-from-it-all type of destinations, then Newfoundland is sure to please. Known for offering some of the best selection of winter sports in the eastern region and backdropped by incredibly scenic views of Marble Mountain, a trip to Newfoundland is bound to leave you speechless. We recommend basing yourself in Gros Morne National Park for the best views and skiing opportunities in the area!


And that’s our list of the best winter destinations in Canada! Seriously, don’t let the low temperatures put off your trip, as long as you make sure to pack the right clothes, you’re in for a trip of a lifetime!

Have you ever visited Canada during the winter? What are some other must-see places that we didn’t include in the list? Let us know in the comment section below!

Read Next: Canada’s Best Rail Journeys To Add To Your Bucket-List