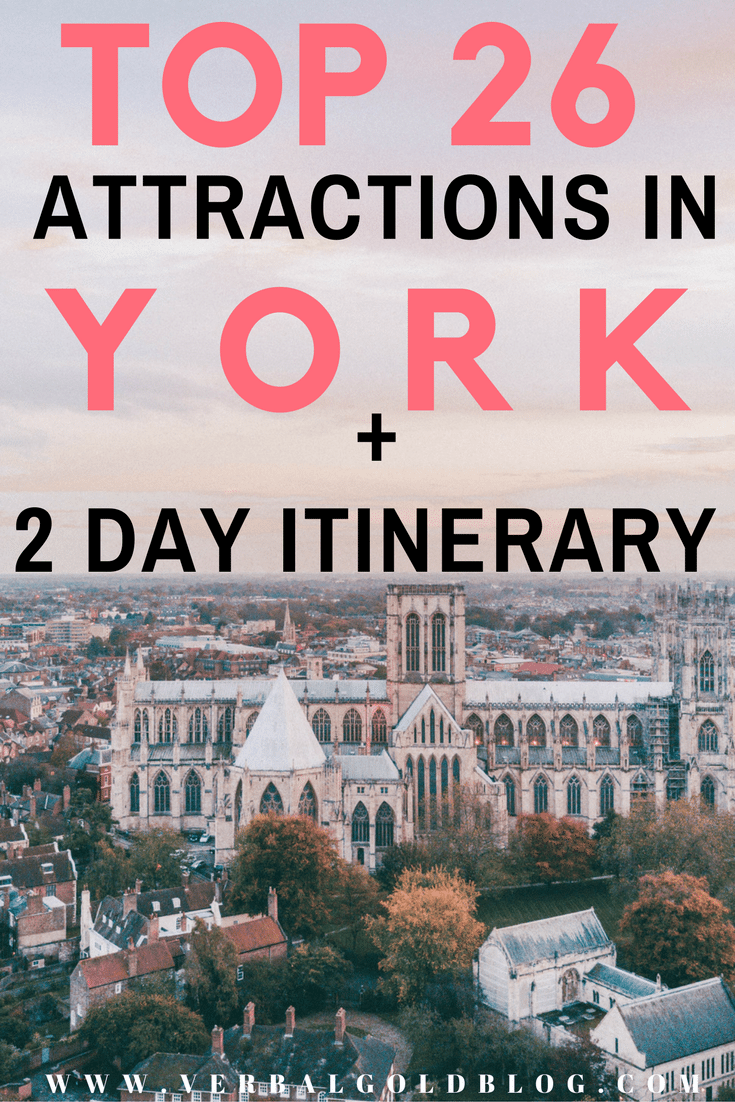 York is a lovely little city just North of London. I suggest grabbing a train ticket and heading North to explore York if you’re visiting Great Britain. York is a city full of history and heritage but it’s also a very contemporary city, a place where you can truly create your own adventure! There is so much you can do and see in York whether you’re there for a weekend, a week, or just 24 hours, I hope this list of top attractions will help get you on your way!

26 Things To Check Out When You’re in York

ProTip: Get the York pass to save over 50 euros when exploring York.

We went in the fall/winter so it was a nice and cool with light showers during our visit. I’m not one for being hot so I like to do my city tours in the fall and winter. I definitely learned a lot about what to wear while I was there though. I even made a rookie mistake and had to stop and buy a jacket and boots while I was there. So you don’t make the same mistakes I’ve made you a guide of what to wear. Remember to dress in layers and always have a rain jacket with a hood that’s also warm, an umbrella, and comfortable shoes. I can’t stress the comfortable shoes enough. It’s important to also bring some that are weather proof / rain resistant and sturdy. My poor suede over the knee boots didn’t make it back home with me because the heel broke due to the walking and the seam split on this last trip. RIP because those were my favorite boots. So more proof to bring durable clothes and shoes!

As far as travel backpacks go, they’re a must. Over the shoulder purses can get heavy and start weighing you down. Then you get the pain points in your shoulders and back and when you’re traveling it’s just not worth it. I always vote for a good backpack. A few things to keep in mind…make sure your backpack is foldable. This comes in handy when traveling if you need to roll it up into your suitcase. If you plan on doing a lot of walking, try to pick one that is weather proof. I picked a fur one while I was traveling and I loved it. I thought it was super cute but unfortunately the fur got everywhere and because of the light color it ended up showing wear. I’d choose a dark colored backpack with separate compartments. Keep in mind that this backpack is different from the huge equipment backpack we carry. This one is more for exploring the city not for traveling.

Also, I don’t like to bring my designer bags when traveling internationally. I try to keep it lowpro because I already have so much camera equipment with me I’d rather not be lugging it around in my Chanel or LV backpack. Although they are super cute and fashionable I just don’t want to draw that kind of attention when I’m alone in another country. Another tip I learned is try not to wear ripped jeans when traveling internationally. For some reason, they mean different things to different people in different cultures. And I always want y’all to be safe.

Written By
Ady
More from Ady
Our favorite nanny is back with new adventures on the film Mary...
Read More