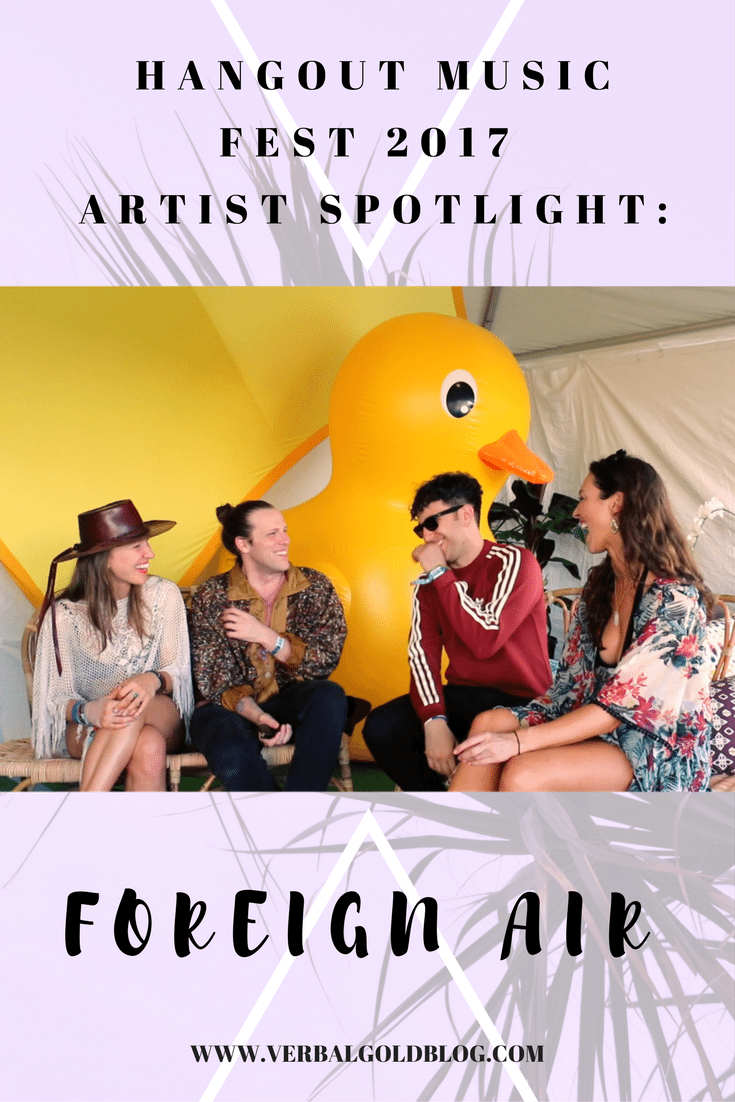 Hey guys! Victoria and Abbie here with Verbal Gold Blog reporting back after our amazing time at Hangout Music Fest! When we first heard Foreign Air’s debut EP For the Light, we knew they were a rising force to be reckoned with. This dangerous duo from North Carolina, Jesse Clasen and Jacob Michael, embody a raw authenticity that is exemplified euphorically on stage. Their electro tinged pop sound and folksy backwoods soul breezed through the barefoot crowd dancing on the white sand beaches of Gulf Shores! It happened to be their very first visit to the state of Alabama, “We were surprised with how many people had heard our music down here,” said Jacob, the bassist and producer. Needless to say, we were ecstatic to see Foreign Air perform live!

Check out what Jesse and Jacob had to say about the journey of Foreign Air through our behind the scenes interview!

Here are four of our most memorable insights from our time together.

“When we first started Foreign Air there was no real goal or purpose or anything, we were just doing it for fun, and we wanted to play new instruments, get drum samplers, synthesizers and figure them out. And it kind of all happened overnight; we put a song out on Soundcloud, then Billboard heard it and the next day we were off and running.” – Jacob

Foreign Air is like a Living Organism of Sound Exploration

“The name “Foreign Air” to me is like if the band was an organism and we were creating music, the “Foreign Air” is filling the room with instruments that aren’t normally played. We use drum samplers and synthesizers and we approached writing songs in a different way, but we are trying to get the same end result. This makes it exciting for us.” – Jesse

“I think we are still exploring and trying to figure out what our sound is and I think a lot of the fun is just trying new things and working with different people. Our music is pretty eclectic and kinda crazy… We are huge fans of hip-hop, electronic, indie rock and alternative music and we try to incorporate all of that into our sound.” – Jacob

Los Angeles is the College Campus of Artist Inspiration

When asked about current destinations for creative inspo, Jacob replied, “I would say LA has been the most inspiring destination for me just because there is so much happening out there and there are so many types of musicians and pockets of music. It feels like a giant college campus where you go get coffee, go to a donut shop, or go to a friends house… We have been spending a lot of time out in LA working with different musicians I think the next step would be to get Jesse and I in a room making a full length album.”

Music is a Lovesick Cycle of Expressive Emotion

My favorite song by Foreign Air is called Better For It. I like this song because there are so many intricate details and parts to it, building up into an ecstasy of pure emotion. I wanted to know everything about it, like where it came from, what emotions were involved in writing it and Jesse then elaborated, “I wrote that song coming from the porch of an ex-girlfriend. I went directly into my room, and it just happened. It was how I was feeling… It’s a sad sounding song in a way, but ever since I was young, music for me is putting emotion into a sound and then, that sound resonates and basically feeds back into that emotion again. It’s kind of like a lovesick cycle. And that is what music is! I think people really connect when they feel how you felt.”

Thank you Foreign Air for broadening our music senses and allowing us to tap into unexplored emotion through your creative sound!

Be sure to follow them for upcoming tour dates and news, @Foreign_Air !

Written By
Victoria
More from Victoria
Festivals have a special way of bringing out creative expression where...
Read More