Galway, Ireland…not just for the Ed Sheeran super fans but for the spirited at heart! We love that Ed shot this video himself. Make sure to watch it before or after you read this post.

How to follow Ed Sheeran’s ‘Galway Girl’ through Galway, Ireland 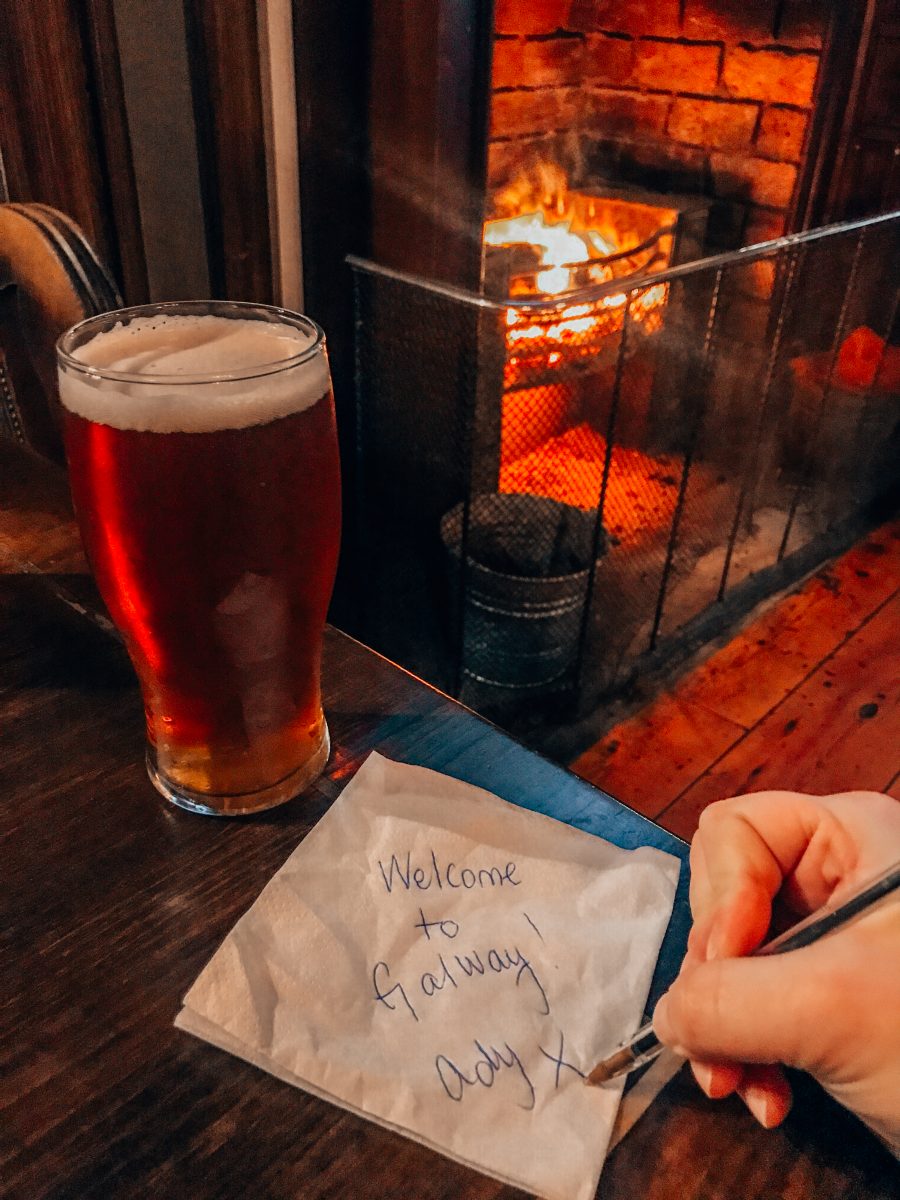 For our road trip through the southern coast of Ireland, Ady made us an Irish themed playlist to make the drive more fun! One of those songs included Galway Girl by Ed Sheeran and then the bright idea came to us…we want to be Galway Girls for the day! What did this mean? It meant watching the music video over and over and studying where Ed Sheeran shot the video and experiencing all of those places for ourselves. Honestly, Ady and I are still listening to this song on repeat as we write this post. It’s a super fun song and puts us in a good mood!

We talked to a bunch of the locals, got the scoop, googled a ton, and followed all of the tips through Galway.  It was like a treasure hunt around the city. Definitely not an easy one but I think we did a pretty good job! If we missed anything, drop some knowledge in the comment section!

From our understanding, Grafton Street (Irish: Sráid Grafton) from the video is one of the two principal shopping streets in Dublin city centre, the other being Henry Street. It runs from Saint Stephen’s Green in the south (at the highest point of the street) to College Green in the north (to the lowest point). So besides that little bit we tried to chase everything else down in Galway!

After taking in the famous pubs, walk the city and enjoy the vibrant culture around you! Or if you feel the energy…dance through the streets with an Irish playlist!

Galway is colorful, lively, exciting, electric, and a ton of fun. The food is hearty and the pubs are beautiful and full of life. We stopped at another bar and it had the most amazing wood carvings, wood banisters, ceilings, fire places and so much more. You can’t look anywhere in this fascinating town without being impressed.

When you are walking through the streets, you feel like you are in another world. There are cobblestones underneath your feet and the people take up the road surrounding the shops. The cars are circling the city so you don’t have to battle the traffic too much. There are flower shops and twinkly lights in every direction. I felt like spinning in circles with my arms wide as I was walking around this city.

We stayed at The Galway Bay Hotel which was literally right down the street from the famous O’Connors Bar! The bar opened in 1942 and is still known today as eclectic and the first pub in Ireland to be called a “singing” pub. It’s only fitting that Ed shoot his video here!  This bar is a must! 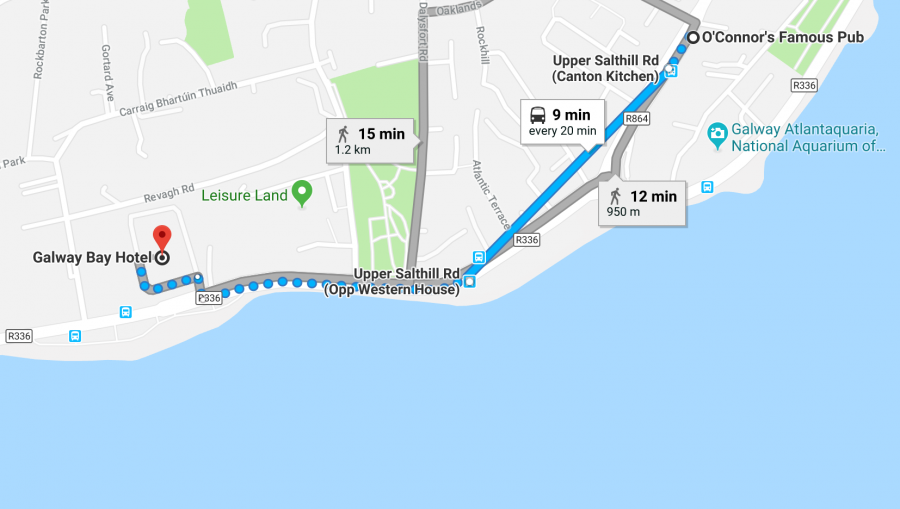 Where Ed Sheeran stayed and filmed the final scene in the music video. The sound of seagulls flying overhead and the waves crashing against the shore is a very real sound and so relaxing. It brings back so many good memories we made in Galway.

We started at O’Connell’s pub where the video begins and hung out in the area that the pub now deems to be “Ed’s Snug.” We got together and took pics in the photo booth, had a few drinks, and walked around the pub to take in all the cool decorations. This bar has so many rooms, it’s amazing. 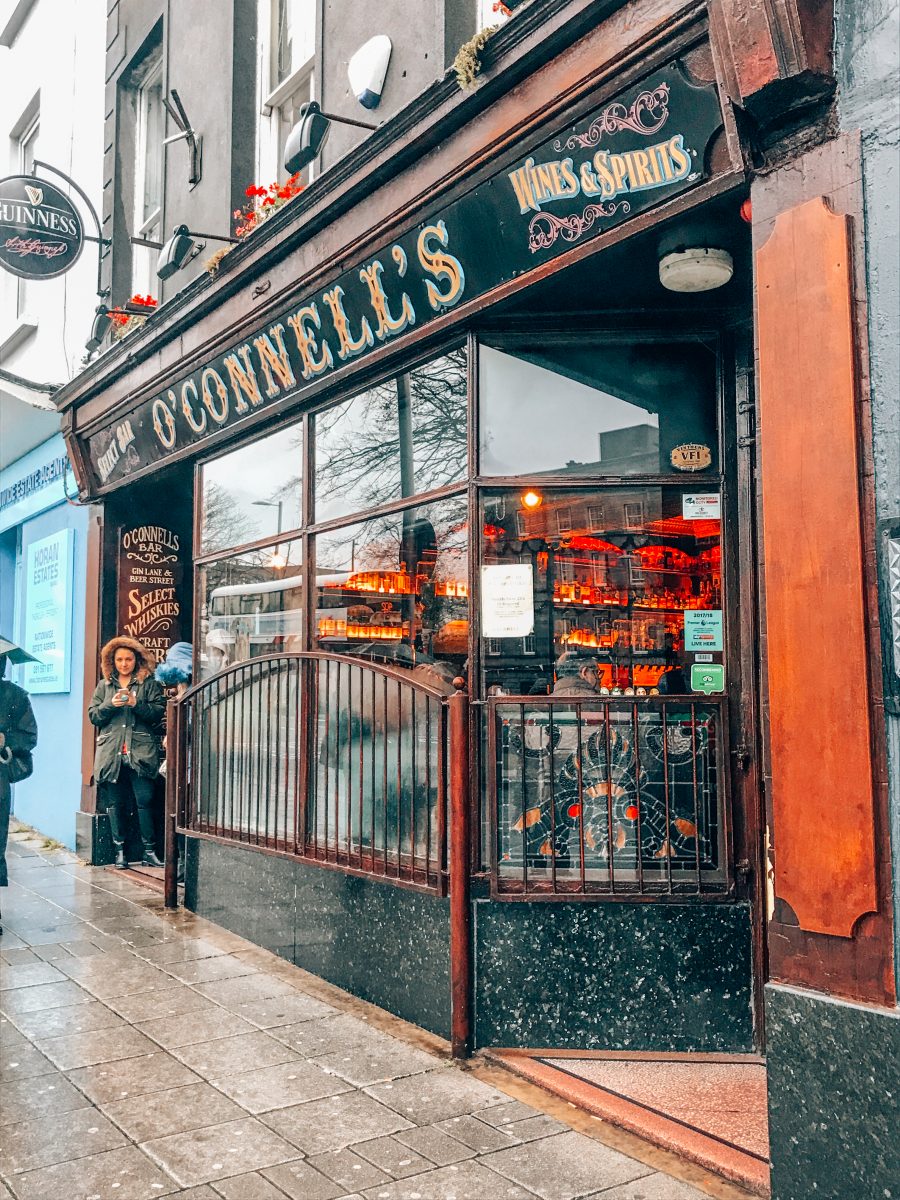 Did you know @teddysphotos filmed his music video for Galway Girl in Galway,Ireland?? We actually retraced his steps in the video and it was so much fun!!! Do you think it deserves a blog post?? ✨ #edssnug #25daysoftravel

This place was a cute little shop on the busy Williams Street. Lots of Irish gifts and things. The street is also pretty busy, full of performers and musicians and lovely Irish lads and lassies… and tourist. lol We heard they shut down the entire street the Treasure Chest was on and filmed for 3 days straight. We also heard the Ceili dancers may have been staged because no one had ever seen them before but there are a lot of street performers so it could have been possible. Their names are listed under the video information. 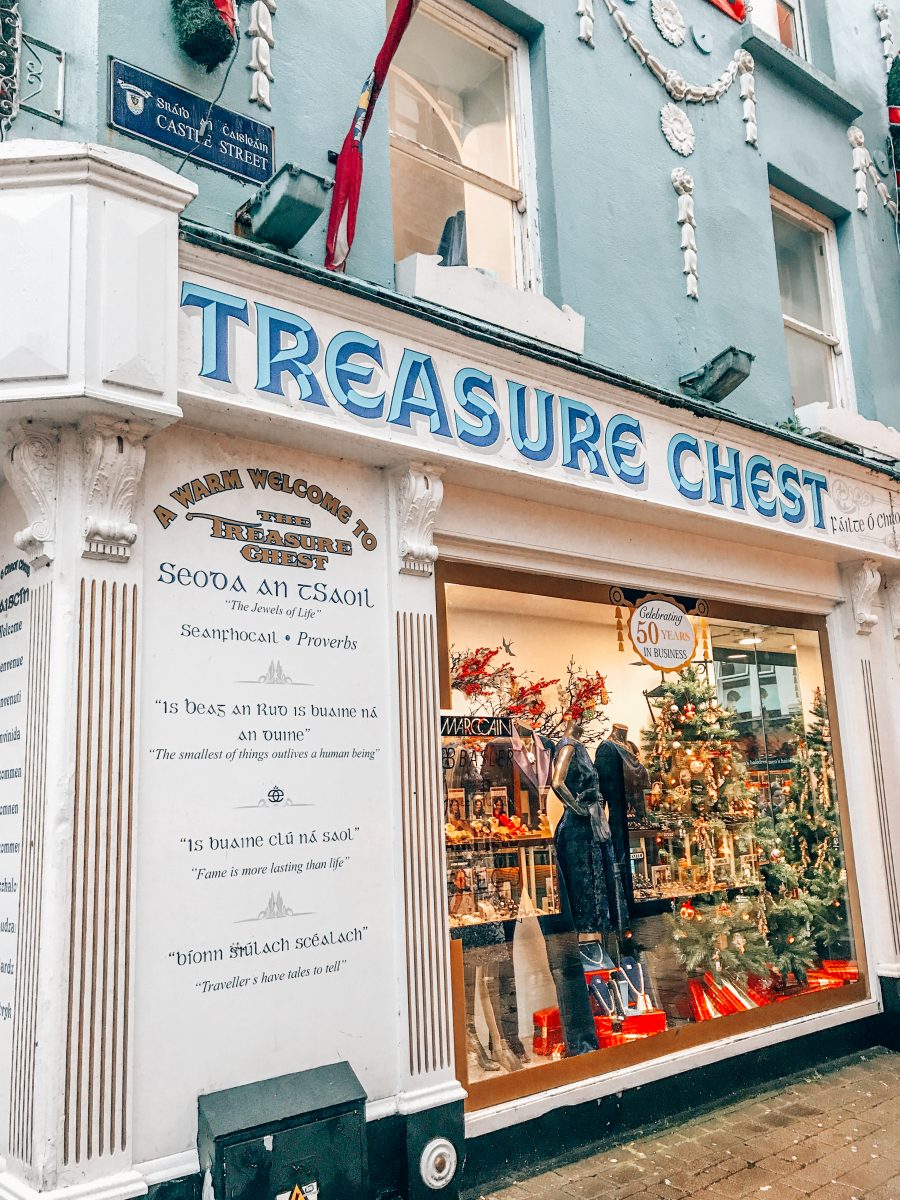 Ok, so you’ve danced around to Galway Girl blasting on your iphone at O’Connors and explored the downtown streets…now what?! Run the streets of Upper Salthill and end up at a tattoo shop like he did in the end of his music video!

Finding out where Ed got his tattoo deemed to be a serious challenge. We had a hard time finding Brian Power @power.tattoo and that’s because he’s a tattoo artist that on Instagram is listed in Dublin. Bummer. Everyone seemed to have a different story so we ended up at none of than Galway Tattoo. It isn’t easy to find honestly. It is snugged in between shops and up a very narrow set of stairs. It seemed like the right place because of the privacy at least. Although, quite a few of us wanted a tattoo, only Dooley ended up getting one. The crew that worked there was pretty awesome and this little kid was helping his dad out. He was super cute as he says, “You aren’t from here are you?!” He said my “tone” made my voice sound funny! Hahaha! He was referring to our accents but we loved interacting with him. 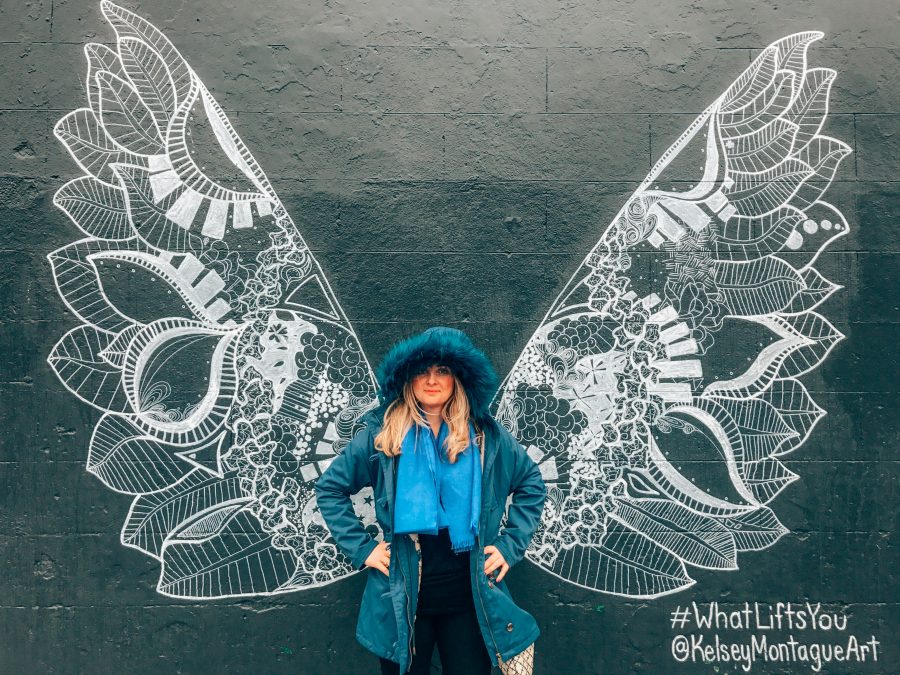 The Galway Girl experience as I call it was so much fun. Now, if you aren’t an Ed Sheeran fan I won’t hold it against you if you promise not to let it stop you from visiting Galway. I don’t really know anyone who isn’t a Ed fan…I mean, can you get any more talented? If you are in Ireland, be sure to make this one of your stops. I promise you, you won’t be disappointed. 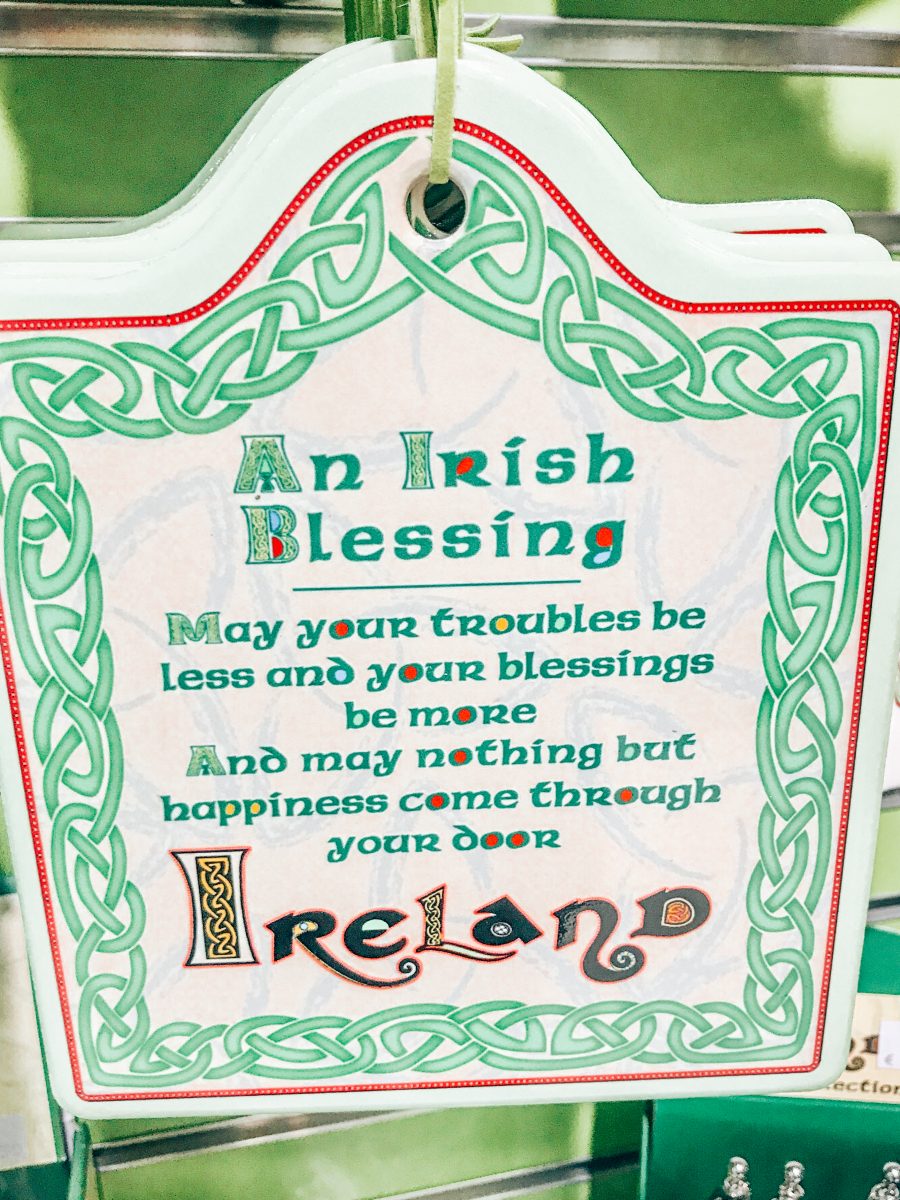 Mapped for you here

Written By
Lo
More from Lo
If you are planning to go abroad for your first time, fear...
Read More