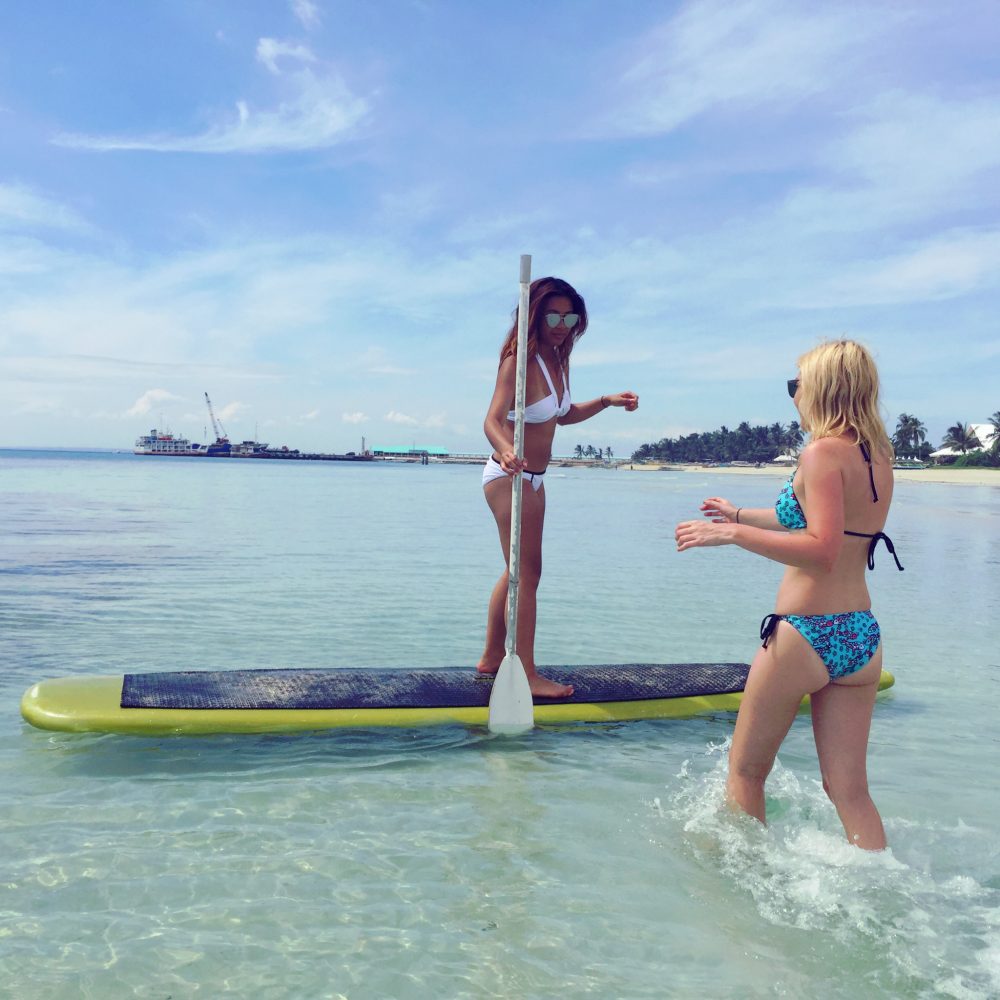 The Ultimate Guide to Bantayan Island 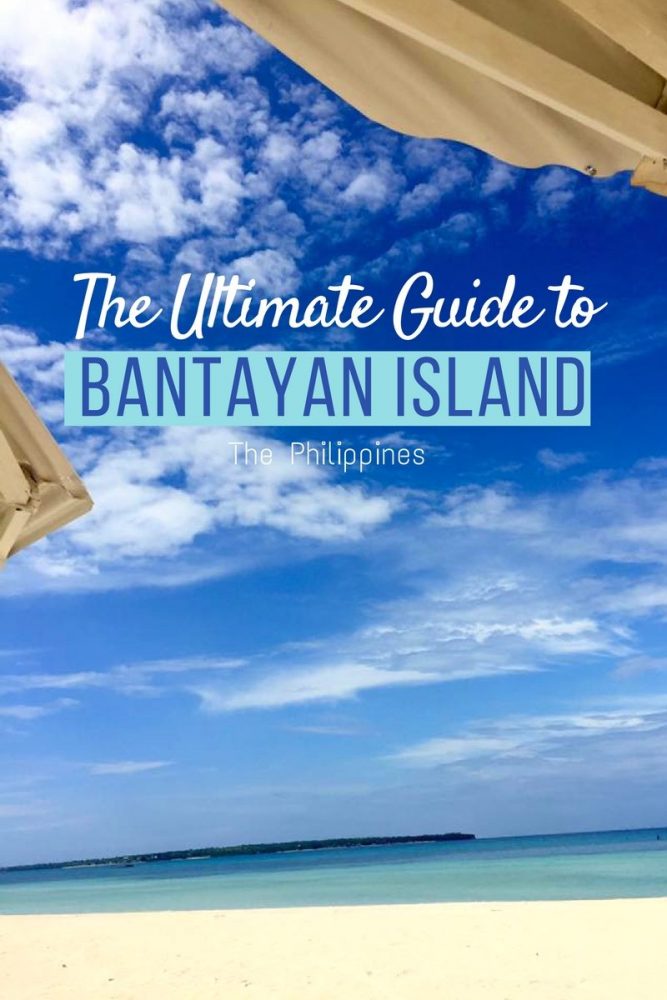 Recently I had the opportunity to travel around South East Asia and I was definitely most impressed by The Philippines.

We flew into Cebu, where we stayed in Cebu City, but after a few days in the city we wanted to check out the beaches that we had heard so much about (we stalked a bunch of people on insta with amazing beach shots in The Philippines).

So we made the long drive up the mountains, this took around 4-5 hours to the ferry port, where you can catch a ferry to Bantayan Island which takes 30 minutes. 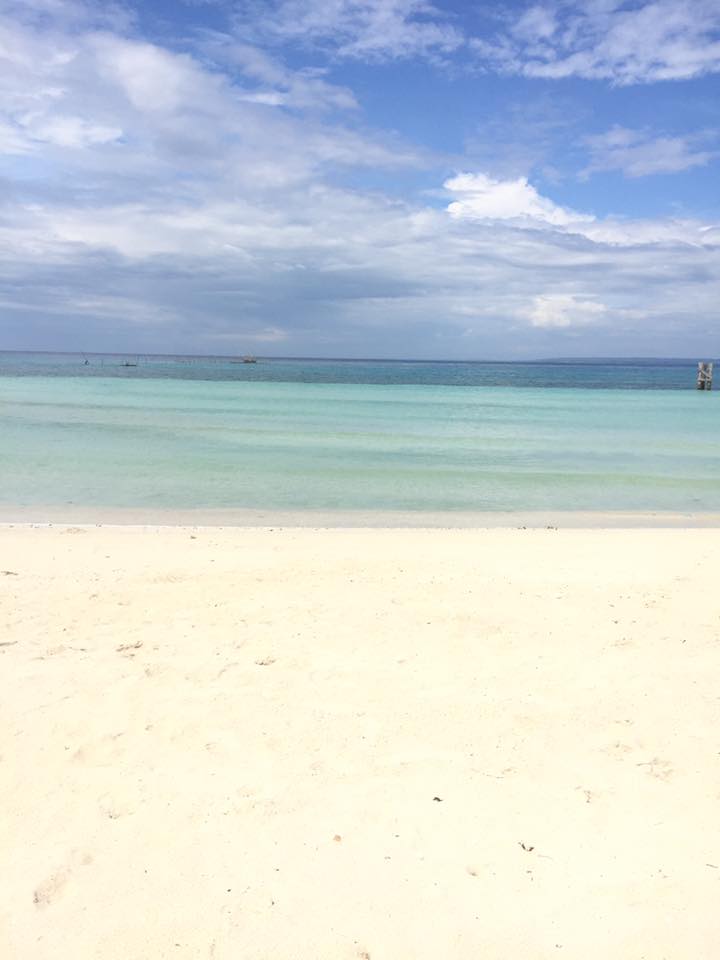 Tip: Stay in Santa Fe Resort, this is the best beach on Bantayan Island.

We had initially planned to stay in a friends beach house, but when we arrived at around 9pm the island had lost power (yep! The island is so remote it lost power!) and the only places with electricity were the large hotels on the island.

So the desire to have electricity so we could shower and charge our phones led us to Santa Fe Beach Club as  it was the only place with availability at short notice. 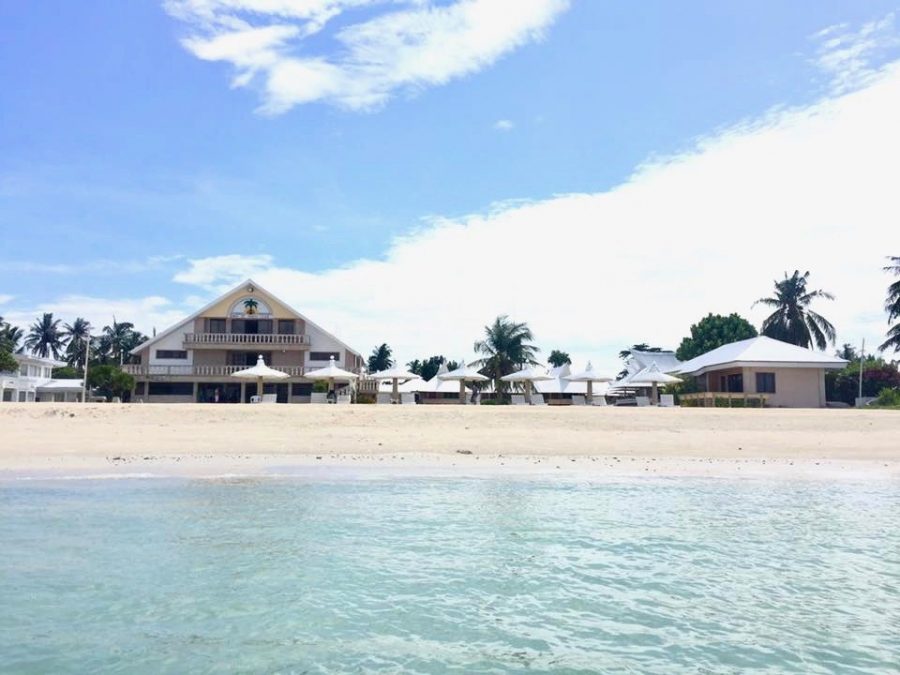 When we first arrived we had no idea what the hotel was like as a long day of travelling meant we showered and headed straight to bed. However, to our surprise the next morning we walked out of our room to the most amazing beach view. 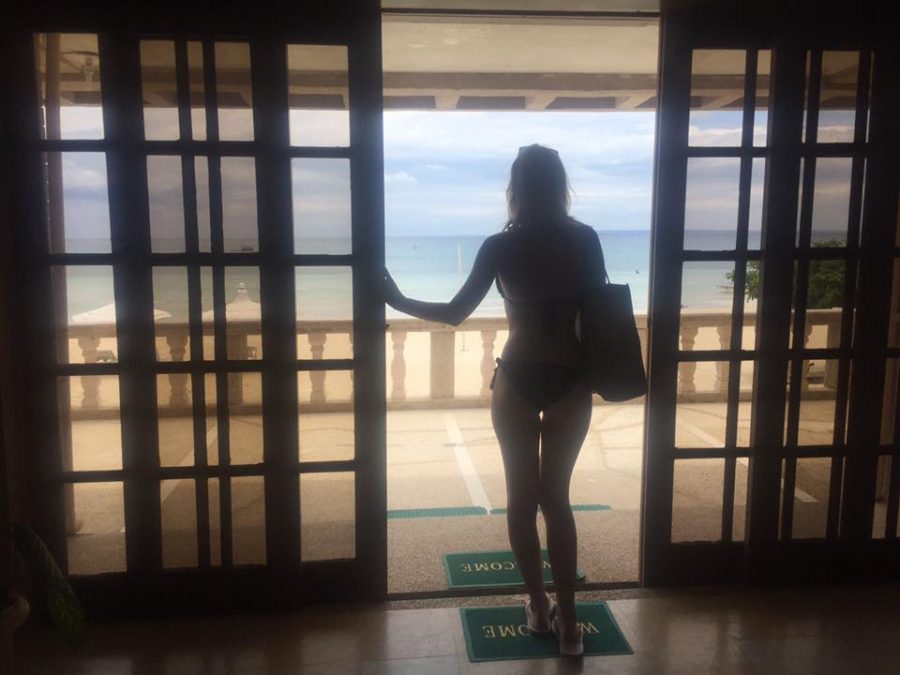 Although we stayed as Santa Fe beach Club by chance, it turns out it was the perfect hotel for us. It was literally 10 steps to the crisp white sand.

Costs: The Philippines on the whole is good value for money but the islands are slightly more expensive but even still the hotel cost around 1000 pesos ($20) a night for a double room!

$20 for a room where you can walk out onto the most perfect beach you really can not complain!

Although it took around 5 hours to reach Bantayan Island, waking up the next day to the perfect view of the empty pristine beach made up for long journey! 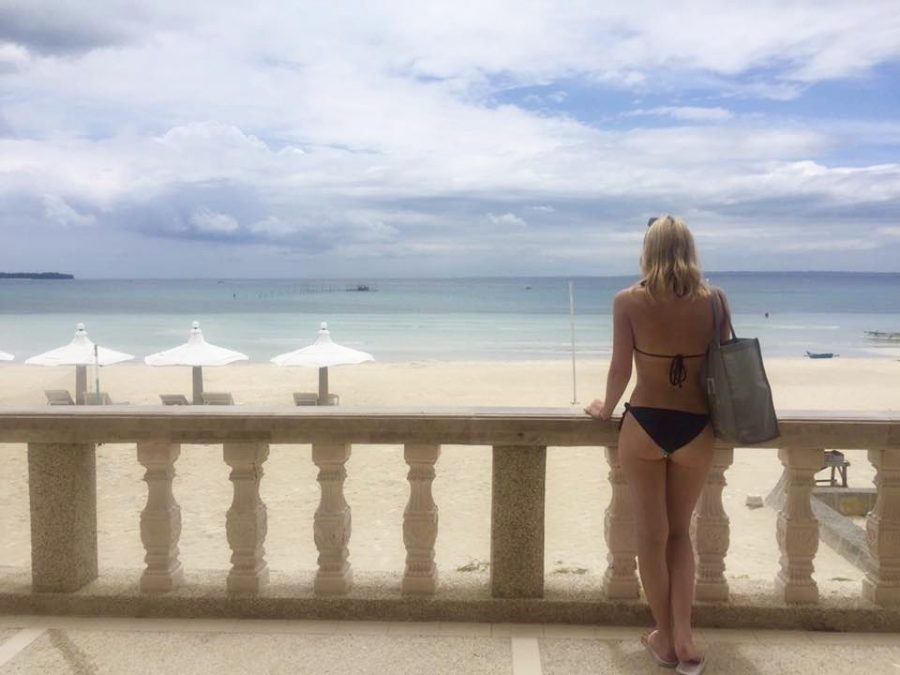 The perfect view to wake up to

I could count the number of people on Santa Fe beach on one hand!

You need to spend the entire day on the beach and make the most of it being tourist free because this is a rarity in Asia as you normally have to fight for a seat and getting a photo without any one else in it is a luxury! 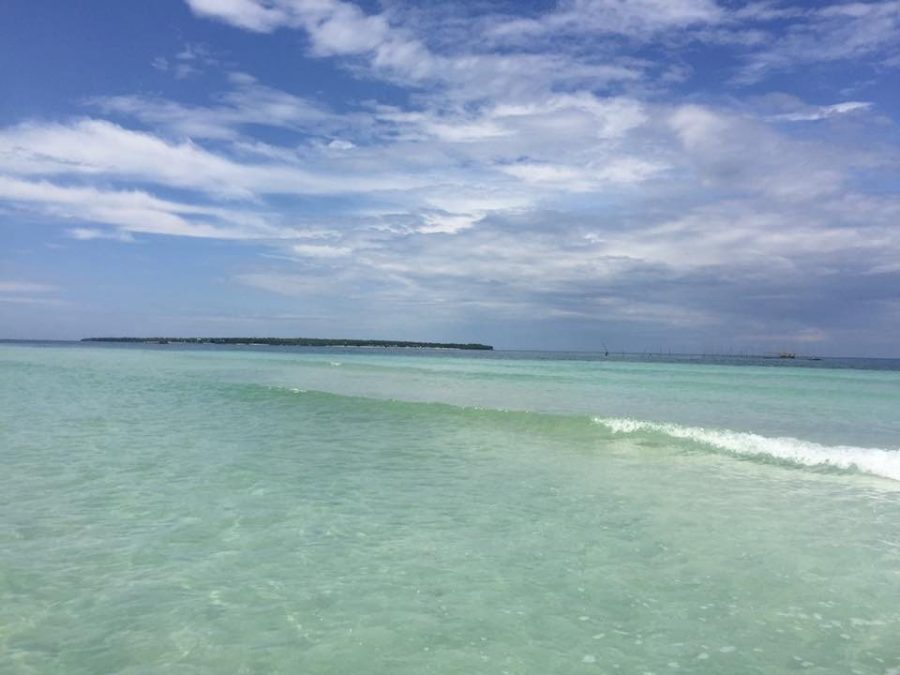 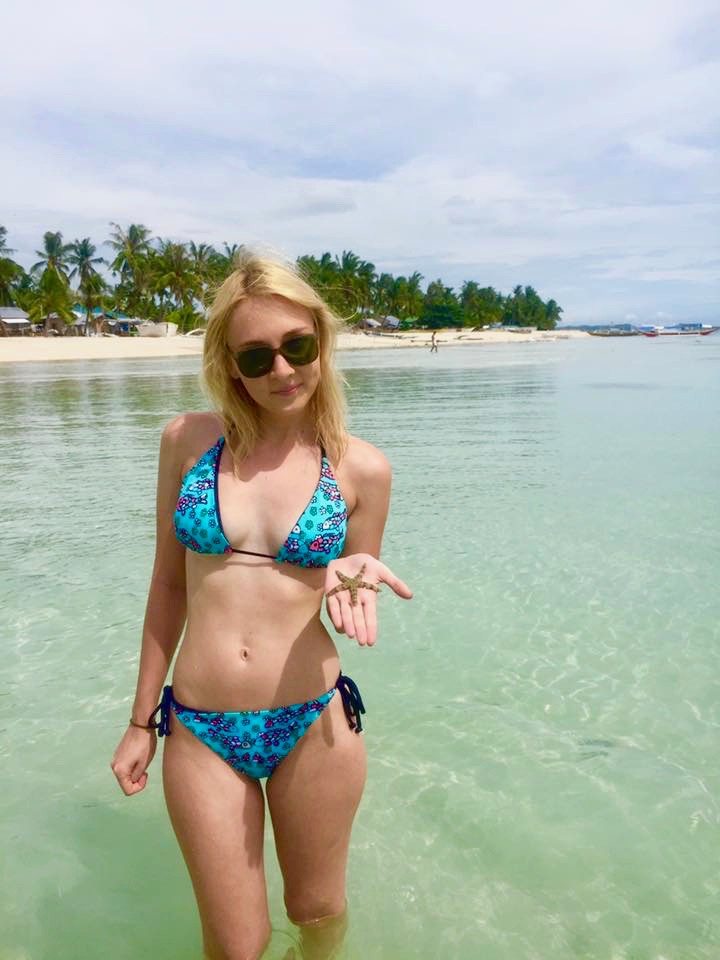 My only friend on Santa Fe beach

Tip: Look out for starfish in the sand especially in high tide they all gather on the sandbar!

The beach for the most part is untouched. You will find some impressive shells that look like they’re from  The Little Mermaid set. Apart from collecting prestine untouched shells on the beach we tried paddle boarding! 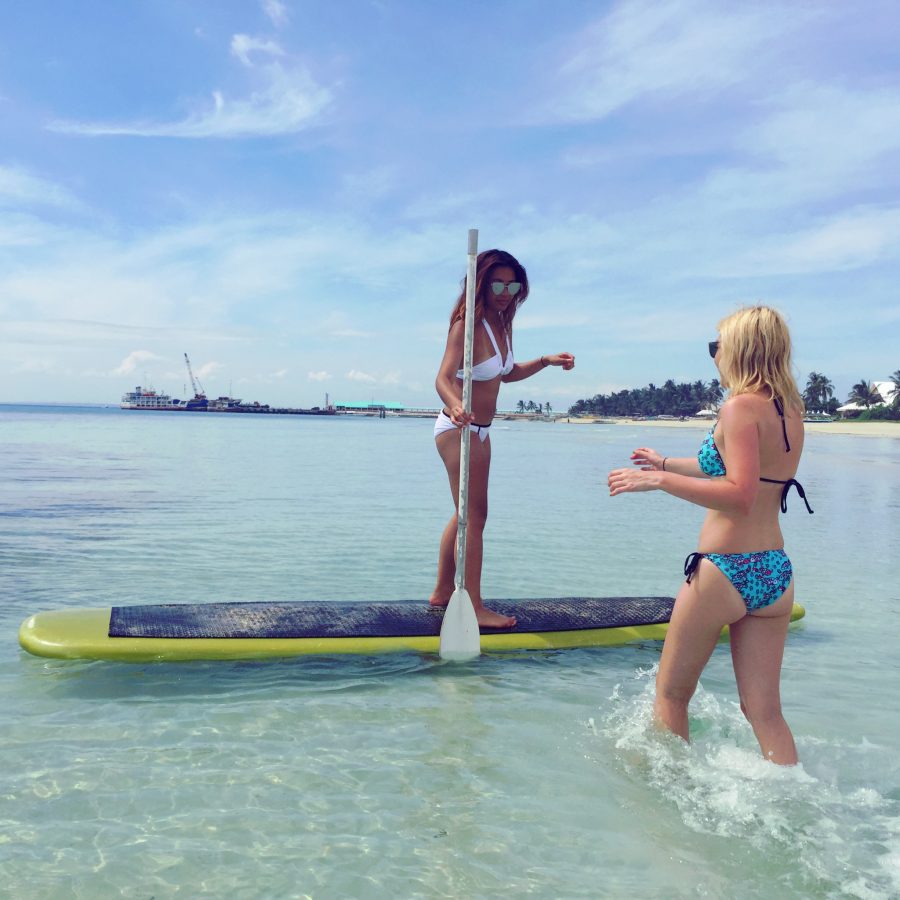 If you haven’t tried paddle boarding before, Bantayan Island is the perfect place to give it a try!  Not only is it cheap to rent but the beaches are far from crowded, so there is nobody there to laugh when you fall.  The water is so clear you have an amazing view of all the fish beneath you! 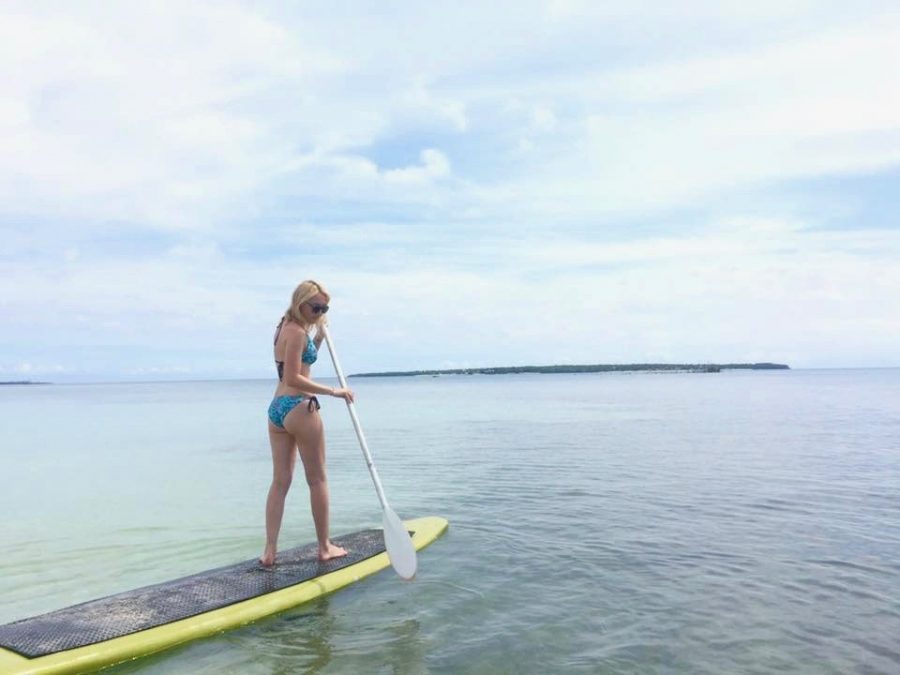 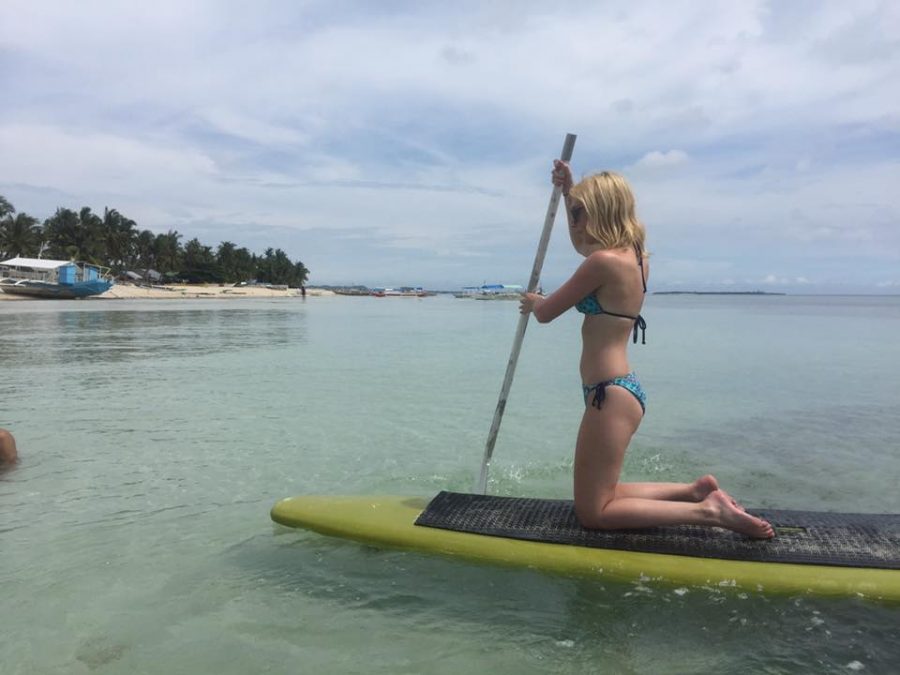 They also have a cool water bicycle so you can literally ride the waves but you can only use this in low tide.  Luckily for us it was high tide which meant we got to enjoy the ‘sand bar’ as the shallow water stretched the length of the beach we even managed to sit on the sand about a 100 meters in, the water was that shallow. 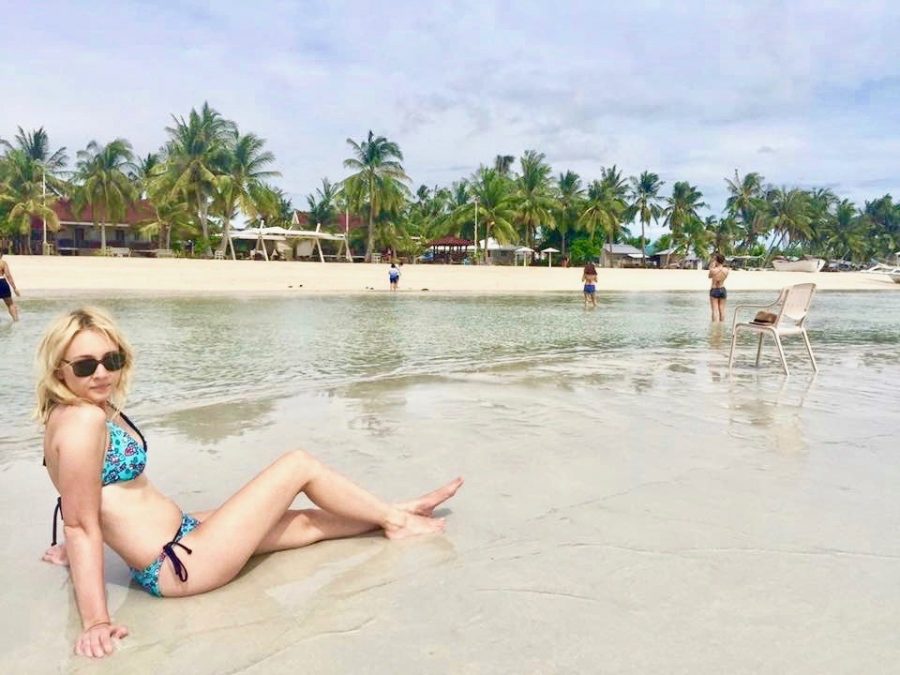 What to Eat & Drink

You can not spend the day at the beach in the Philippines without drinking fresh coconut water!

Tip:  once you have drank the water you can ask at the kiosk you bought it form to cut it up for you so you can then eat the coconut too!

And of course I wouldn’t be a ‘proper tourist’ in Asia without trying Pepsi in a bag! Look out for the small stores with glass bottle drinks they often put them in a plastic bag so you don’t have to carry the bottle.  These are perfect when exploring the island as it is often hard to find a bin (trash can for you Americans) for the glass bottles. 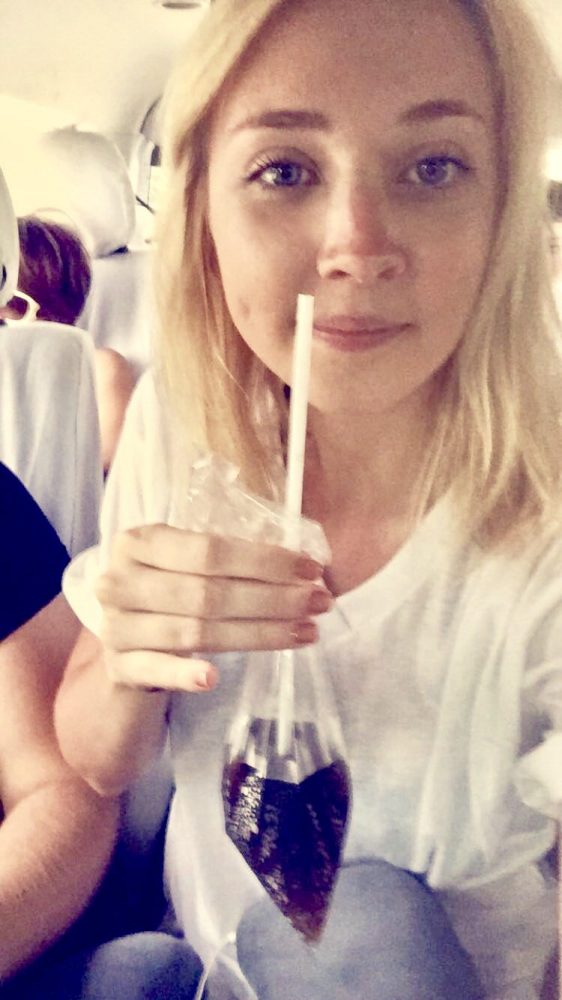 Now on to food… I would say try as much local cuisine as possible but due to the size of the island, all you will find is local food- you wont find McDonald’s on Bantayan Island thats for sure!  YOU HAVE TO try pork pork BBQ, they are little sticks of deliciousness! Pork BBQ is available everywhere at little kiosks dotted around. I must admit I was sceptical about ‘street food’ at first, but it is the norm here and the food is so good!

We had such a great time on Bantayan Island. We only stayed for 2 days because it’s really small, but if you’re looking for a beautiful sandy beach with crystal clear water, GO TO BANTAYAN!  Bantayan has all the characteristics of a beautiful South East Asian beach, but without the hussle and bussle of thousands of tourists .
TAGS:asiabantayan islandPhilippinessoutheast asiatraveltravel blogtravel bloggeruk bloggervgbtravelswanderlust

The Most Beautiful Towns and Cities in Germany

The Most Beautiful Arizona Waterfalls